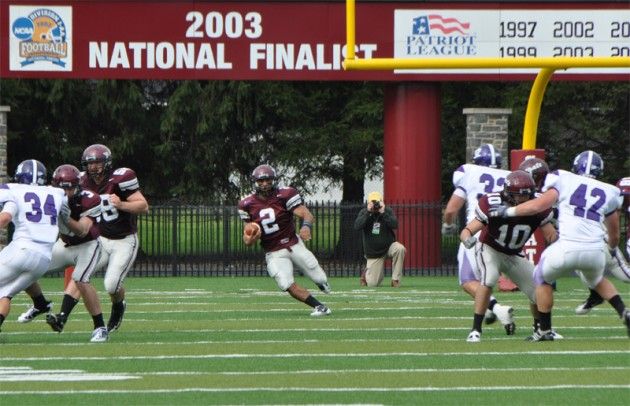 Junior running back Nate Eachus ran for 155 yards and two touchdowns and Colgate came back from a 17-point deficit, but it was not enough and the Crusaders downed the Raiders 31-24 Saturday at Andy Kerr Stadium.

Down 24-7 at the half, ‘Gate responded with 17 unanswered points to pull even with the Crusaders at the 6:37 mark of the fourth quar­ter. Holy Cross mustered just enough offense for the victory, as quarterback Ryan Taggart hit Bill Edger in the back, right corner of the end zone with five seconds left, giving Holy Cross its first victory in Hamilton since 2000.

Eachus, in addition to his 29 carries, caught three passes for 24 yards while senior quarterback Greg Sullivan went 16-28 for 148 yards and a touchdown. Senior wide out Doug Rosnick added four receptions for 53 yards and a touchdown while first-year Dan­iel Cason had a career-high five catches. As a team, Colgate outgained the Crusaders 356-248 in total yards and controlled the ball for 13 more minutes, but the statistics did not matter in the end.

It was an inauspicious beginning for the Raiders (4-3, 1-1) as they went three-and-out on their first possession. After forcing Holy Cross (4-4, 1-1) to punt it away, ‘Gate fumbled and turned the ball over on the return, giving the Crusaders prime field position at the 15-yard line. They capitalized two plays later with a 14-yard touchdown pass to go up 7-0.

With a chance to respond early, the Raiders promptly gave the ball right back to the Cru­saders on a Nate Eachus fumble at the ‘Gate 34-yard line. The defense was able to hold this time, allowing only a 22-yard field goal by kicker Rob Dornfried. Still, the Raiders were in a 10-0 hole early and the situation did not improve from there.

‘Gate seemed to be right back in the game a few possessions later, as Eachus broke through for a huge 35-yard touchdown run to cap off a four-play, 56-yard drive. However, the lead was only cut to three momentarily as the Crusaders’ Andrew Zitnik returned the ensuing kickoff 93 yards for a touchdown.

The Raiders managed very little in the second quarter, going only so far as the Holy Cross 24-yard line before turning it over on downs. With its offense out of sync, ‘Gate needed its defense to hold the Crusaders and stay in the game. That task became increasingly more difficult, as they received great field position in Raiders territory.

Starting from the Raiders 27, Holy Cross added to its lead with 3:51 remaining the sec­ond quarter when quarterback Mark Tolzien found Luke Chmeilinski open in the back of the end zone for a seven-yard touchdown pass on third-and-three to give the Crusaders a 24-7 lead at the half and a whole lot for the Raiders to think about.

“We knew we were killing ourselves and not giving ourselves a chance on offense,” Rosnick said. “We stressed ball security and picking up the tempo in and out of the huddle. We knew we could get going, it was just a matter of time.”

Colgate opened the third quarter with a 23-play, 97-yard scoring drive, capped off by a two-yard scoring run from Eachus to bring the Raiders within 10 points. The scoring drive took an astonishing 10:55 and was ‘Gate’s longest of the season.

Senior defensive end Lamont Sonds sacked Tolzien in the end zone on the Crusaders’ next possession, giving Colgate another two points and closing the gap to 24-16 at the end of the third quarter.

Sullivan and the Raiders then put together a 16-play, 66-yard scoring drive, capped off by a five-yard touchdown pass from Sullivan to Rosnick on fourth-and-goal to make it a 24-22 game.

“I knew I needed to make a play for the team,” Rosnick said. “I had been out the whole drive due to an ankle sprain, but Coach Young threw me in there on fourth-down and told me to make a play. I expected the ball from Sully so I just got open and fought for [it].”

Sullivan then hit Rosnick in the flat on the two-point conversion and, though he was stopped initially, Rosnick’s second effort was just enough to get the ball past the pylon to tie the game at 24.

“The two-point conversion was a quick hit­ting play that we had been practicing for that certain situation,” Rosnick added. “I knew I had to beat one guy so I just tried to make something happen.”

After a critical stop at the ‘Gate 31-yard line, the Raiders were in great position to win the game with the ball and 1:41 left. Unfortunately, a holding penalty pushed them back and the Crusaders got the ball with 1:03 to go. That was all the time they needed. Quarterback Ryan Tag­gart led the Crusaders down the field, moving 76 yards in eight plays to seal the game. After a huge completion to Freddie Santana, Holy Cross decided to go for the touchdown instead of a relatively short field goal. The risk paid off as Taggart hit Edger for the game-winning score, leaving ‘Gate in shock at its 31-24 defeat.

Next, the Raiders head to Bethlehem, PA to face a solid Lehigh team. The game is slated for a 12:30 p.m. start on Saturday.