Alumnus and “The Onion” CEO Speaks on Campus 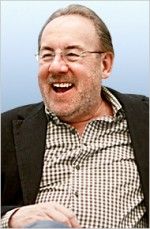 Alumnus Steve Hannah ’70 and Chief Executive Officer of Onion, Inc., presented to a packed Love Auditorium on Thursday, September 30. Many students and faculty members came out to hear the CEO discuss his experiences on the hill, life after Colgate and some history and headlines from The Onion News Network.

The Onion is a satirical news organization which bills itself as “America’s Finest News Source,” and runs headlines such as “Dalai Lama: ‘Where Da Girls At?'” and “Poll: 1 in 5 Americans Believe Obama is a Cactus.” The organization is a multi-platform media company with enterprises online, in print and soon television, with two new television shows on Comedy Central. It claims 3 million unique readers each month.

Hannah spent much of the presentation discussing his transition from Colgate to becoming CEO of a large corporation like Onion, Inc., intermixed with cracks about his time at Colgate.

“I came from a real entertaining Irish-Catholic family. I came to Colgate because the tennis team recruited me … and as my father dropped me off he said, ‘Well, if this doesn’t work, there’s always Vietnam.'”

He began working at the Milwaukee Times as a reporter doing a series of weekly interviews with “unsuspecting” Wisconsinites.

“Then I went to a party with a big shooter at CBS News,” Hannah said, “And he offered me a job.”

While he was working he had a friend who owned a small newspaper business called The Onion and through their cooperation, Hannah became involved with the company.

Hannah’s experience in other news organizations has also kept him conscious of the changing nature of the newspaper industry as well as the importance of maintaining revenue.

“There isn’t any money in print in mainstream newspapers anymore,” Hannah said. “You can get all that information online. I think the biggest problem was Craigslist and the move of classified ads online. You always need to remember you are running a business … It is changing dramatically fast with digitization, etc. and we always are trying to keep up.”

However, Hannah did not disappoint students looking to see some of The Onion’s famous satirical articles, offering up some headlines from The Onion’s “past” (claiming to be several centuries before the incorporation of the company) and current videos on theonion.com. Hannah presented a report titled “Police Slog Through 40,000 Insipid Party Pictures to Find Cause of Dorm Fire” and showed a headline from an eighteenth century edition which reported on Benjamin Franklin’s invention of the “Death Kite.”

Students were thoroughly impressed with the presentation and delivered rousing applause throughout Hannah’s discussion of Colgate, media and The Onion News Network.

First-year Zac Coe, an attendant of the lecture, reacted positively to the presentation.

“I thought [the presentation] was a great combination of material from The Onion and his experiences at Colgate and in the newspaper business,” Coe said. “It was interesting to see how he got from Colgate to working for The Onion.”

“He really had a great sense of humor,” Macey said.