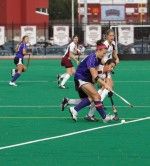 This past Saturday, the Colgate field hockey team won an exciting game against Holy Cross by a score of 1-0. The last home game of the season, this contest rep­resented Colgate’s Senior Day. The team’s record improved to 5-10 overall and 2-2 in Patriot League play. Last weekend, the team also qualified to compete in the Patriot League Tournament.

The only goal of the game was scored by first-year Olivia Nabhan. Another first-year, Halle Biggar, earned an assist on the play. The first half of the game was ulti­mately a draw as both teams shutout the other. Each side took four shots and had four penalty corners.

In the second half, the game re­mained dead locked until Nabhan net­ted the winner just 12 minutes before the game’s conclusion.

“It was an emotional day for everybody,” Lalli said. “With something like a varsity sport that you devote so much time and energy to for so many years, it’s a weird feeling to realize it’s go­ing to end soon. We had the added motivation that a win would qualify us for the Patriot League Tournament, so of course we all wanted to win.”

This week, Lalli also received her fourth Patriot League Goalie of the Week award of the campaign.

The team’s offensive leader, senior Laura Denenga has 19 goals on the sea­son. A consistently dominant force in the Raiders’ offense, Denenga has twice been honored as Second Team All-Patriot League.

Senior captain Allison Waugh has been a fixture of the Colgate backline for the past four years. Last year, Waugh earned the team’s Defensive Player of the Year award.

“I think that the seniors have left a lega­cy of good work ethic,” Head Coach Cathy Foto said. “Their attitude has left a huge mark on the young group – they’re great students and great examples.”

On Saturday, the team will trav­el to Lewisburg, Pennsylvania to take on Bucknell.

“We still have one more regular season game left, so right now we’re focused on that game,” Lalli commented.

The Bison are 11-6 on the season. They are also 2-2 in Patriot League play and have already clinched a spot in the league tournament. Because of the teams’ similar records, Bucknell is just ahead of Colgate in the Patriot League rankings at third. A Colgate win would help boost the team above Bucknell, earning the Raiders the advantage of a higher seed in the league tournament.