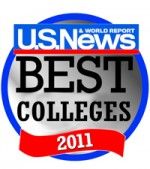 Every year, students, parents and universities, admittedly or not, anxiously await the U.S. News and World Report ranking of the nation’s best colleges. While the reporters behind the ranking system spend the entire year surveying colleges and gathering information to establish the most accurate list possible, much of the comparison, data and raw scoring process is a mystery to the public and the ranked colleges alike.

Colgate’s ranking in this year’s report puzzled many of the faculty and staff at the Office of Admission. This year marks a drop of two places from the 2010 edition of the Best Colleges.

“We have to pay attention to it on some level,” Director of the Office of Institutional Planning and Research Brendt Simpson said, “even though we may not agree with the methodology or what they are measuring.”

Although U.S. News and World Report does not provide colleges or the public with the exact formula they use to generate scores, many members of the Colgate staff, like Simpson, have done great research on the drop and the ranking system.

Scores, which determine the results of the rank, are developed based on a series of factors including student-faculty ratio, faculty resources, graduation rate and retention rate, admission rate, SAT/ACT test scores of admitted students, class rank of admitted students, alumni giving rate, amount of money spent per student and peer assessment.

Over the past year, several changes have occurred in the weight of specific variables. According to USNews.com, the percentage of weight given to “graduation rate performance” has increased from five to 7.5 percent. However, because of Colgate University’s reputation as a school with a very high graduation rate, this increase is likely to positively affect future rankings and probably did not contribute to the 2011 drop in rank.

Another notable difference in this year’s ranking that may have some relevance to the change in Colgate’s position is the input of high school guidance counselors. U.S. News and World Report has always used peer assessment as a way to judge other colleges. However, this year, the weight of the entire category has dropped from 25 to 22.5 percent and the weight of college presidents, provosts and deans has gone down to 15 percent, leaving 7.5 percent weight to high school guidance counselors. And, while 39 percent of the Colgate class of 2014 graduated from private high schools, the only guidance counselors surveyed were from public schools.

A controversial issue in the “National Liberal Arts Colleges” rankings that may be a factor in Colgate’s decline is the recent addition of the United States Military and Naval Academies to the list. While both academies are highly prestigious and respected, the amount of resources available to the students of U.S. Army and Navy academies are comparable to the resources available to students of other liberal arts colleges due to the fact that they are funded by American tax dollars.

Overall, Colgate’s drop to 21 in the U.S. News and World Report ranking is not too alarming. In fact, although last year’s chart listed the University as 19, Colgate’s score actually improved one point. Part of the explanation for movement up and down the list each year is the large amount of tied scores. Colgate University’s tie for 21 place is the eighth tied score on the report. Ties often cause colleges to jump rankings from year to year. For example, both Grinnell College and Harvey Mudd College, tied for 14 last year, dropped 4 spots to join Hamilton College for 18 place on this year’s ranking.

Although, according to Simpson, the U.S. News and World Report holds “brand recognition” and gains the “most press,” it is clear that the Office of Admission is more concerned with other factors that might affect the applicants to the Class of 2015.

For the first time in history, Colgate University will not be waiving its online application fee for U.S. students who have the ability to pay. Senior Associate Dean of Admission Karen Giannino cites this and the economic situation as two variables that are more likely to decrease applications over the next few months than the recently published ranking.

However, the U.S. News and World Report Best College rankings generates curiosity in prospective students and parents, that even Colgate admissions can not deny.

As Giannino said, “We know that people look at it, for better or worse.”