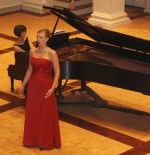 On Friday, September 10, Colgate hosted two musicians: Elizabeth Bouk and Akiko Hosaki. The mezzo-soprano and pianist worked in collaboration to serenade members of the Colgate community as people from the university and the village of Hamilton gathered in the Colgate University Memorial Chapel at 7:30 p.m.

Many traversed up the hill to enjoy the night of  music and song, including Colgate’s own teacher of voice and artist-in-residence, Neva Pilgrim.

“I came out from Syracuse to hear a colleague, and it’s really a beautiful program,” Pilgrim said.

As the lights dimmed, Bouk and Hosaki made their way up to the stage. The evening commenced with a piece by Johannes Brahms called Ziguenerlieder or Gypsy Songs in English. The selection consisted of eight connected pieces all varying widely in rhythmic intensity, tone and melody, making for a sort of musical roller coaster ride. Each song depicted a different part of the complicated lives of the Gypsy.

At once, Bouk transitioned from singing in German to singing in French for next in the program was Banalités by Francis Poulenc. Unlike in Ziguenerlieder, the ten songs of Banalités are not connected and can be sung individually. Bouk and Hosaki, however,  acknowledged how well the songs complement each other musically and chose to string them together.

“We’ve been working about two months on a brand new set, Banalités, but we’ve worked on everything else for a while,” Hosaki said.

The second selection was followed by a brief intermission, giving Bouk’s voice and Hosaki’s scrambling fingers a much needed break and me the opportunity to receive feedback on the two’s performance thus far.

The chattering in the chapel lowered to a whisper as Bouk and Hosaki reclaimed the stage. The program continued with Dominick Argento’s From the Diary of Virginia Woolf. Bouk and Hosaki’s rendition of the cycle proved to be both powerful and beautiful. Before the night came to a close, the duo surprised the audience with an unexpected performance of Kurt Weill’s I’m a Stranger to Myself.

At the conclusion of the program, I had the opportunity to talk to Bouk. Although this is her first official performance at the university, she is no stranger to Hamilton.

“It’s my first official performance through Colgate, but I performed at the Barge last year,” Bouk explained. “I was really looking forward to singing. It was a pleasure to sing in the chapel and the acoustics are great.”

Bouk was not the only one who enjoyed the acoustics.

“Her voice calms me down. She’s really inspiring. After two weeks of classes, this is exactly what I needed to relax a little,” first-year Dan Li said.