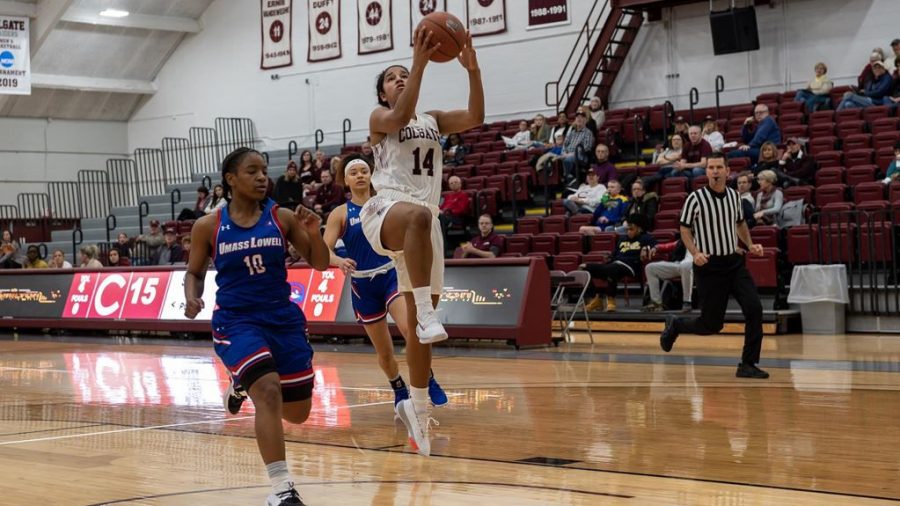 Colgate Women’s Basketball had a solid performance in their second game of the season at home against UMass-Lowell on Sunday, November 10.

The team defeated the UMass River Hawks 73-51 in a fast-paced and competitive game.

In the first quarter, both teams had periods of substantial scoring streaks. The River Hawks had an impressive scrappy performance near the net at the end of the quarter, where they managed to rack up nine consecutive points.

Colgate’s difference-makers in the first quarter were first-year guard Alexa Brodie, senior guard Rachel Thompson and junior guard Nia Ahart. These players each added a few points to the scoreboard and came out hungry to win. The quarter concluded with a score of 15-16 with UMass in the lead by a one point margin.

The second quarter was when the Raiders really started to heat up and prove that they were the dominant team on the court.

Three three-point shots from the Raiders helped to widen the gap between them and the River Hawks.

The River Hawks had glimpses of energy where they capitalized on and succeeded in scoring, but it was noticeably apparent from the crowd that the Raiders were playing with more excitement and grit than their opponent.

The quarter ended with Colgate making a comfortable lead for themselves of 35-23.

The third quarter was dominated by both teams’ offensive plays and quickly turned into a scoring frenzy. UMass quickly added some points to the scoreboard after tip-off and Colgate answered back not too long after. This then led to a back-and-forth scoring battle between both teams, but UMass could not seem to catch up to the Raiders’ strong drives to the hoop.

The third quarter ended with Colgate in the lead by ten points with a score of 51-41.

The Raiders went into the fourth and final quarter with incredible momentum.The quarter had multiple Raiders step up and contribute points to add to the lead. The end of regulation came with an impressive score of 73-51 Colgate, and the Raiders improved to 2-0 on the season.

The game was high-energy the entire time and the Raiders did a phenomenal job of building off the momentum they gained in the second quarter.

Thompson was a key player in Sunday’s game, contributing significantly to the team’s success. Colgate women’s basketball should be very proud of their hard fought win this past Sunday and, so far, the Raiders’ season is off to a great start.

The Raiders hope to extend their winning streak going into their away game against the  Cornell Big Red on November 14.