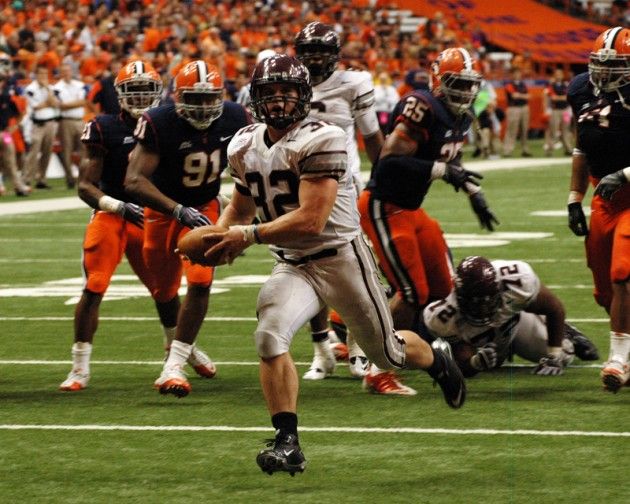 After all of the anticipation, this is not the way the Raiders wanted to renew their oldest rivalry.

Syracuse running back Delone Carter ran for 172 yards and scored four touchdowns on the Raiders, allowing the Orange to pull away in the second half, beating Colgate 42–7 at the Carrier Dome on Saturday.

In this game, junior running back Nate Eachus led the Raiders with 147 yards and a touchdown. Junior quarterback Greg Sullivan passed for 146 yards as Colgate controlled the ball for almost 44 minutes. Unfortunately, it was not nearly enough, as Colgate was hurt early by penalties and the superior athleticism of the Orange later on in the game.

Colgate (1–2) opened the game with an impressive drive, highlighted by a 20-yard completion from Sullivan to senior wide-out Doug Rosnick. ‘Gate moved the ball all the way down to the Syracuse 15-yard line before a failed fourth-and-three attempt ended it.

Syracuse (3–1) immediately responded with great force, only to stall on fourth-and-goal from the Colgate 4. Still, it did not take long for the gamble to pay off.

The Raiders went three-and-out and sophomore kicker Evan Goldszak’s punt sailed out of bounds at the Colgate 45 to give the Orange great field position. Two plays later, Carter scored on a 24-yard run off the right tackle for a 7-0 lead.

The next series was cut short for ‘Gate with an interception by senior free safety Mike Holmes. Syracuse was on the brink of scoring another touchdown when senior safety Mike Barry knocked the ball loose on a corner blitz, allowing junior linemen Greg Kafaf to scoop it up.

Though they did not move the ball, the Raiders controlled the tempo and ran a lot of clock in the first half. They were set to enter the locker room in great shape.

Then Syracuse’s Holmes returned a Colgate punt 22 yards to near midfield with time winding down, giving the Orange a big break. Syracuse quarterback Ryan Nassib then hit junior wide receiver Van Chew for 6 yards, allowing Syracuse to gain 9 yards on a keeper. Nassib then completed a pass to junior running back Antwon Bailey with a 10-yard pass over the middle. Bailey turned the toss into a 37-yard touchdown pass, somersaulting into the end zone to give Syracuse a 14-0 lead with 1:48.

For the Raiders to have a chance against Syracuse, they needed to keep the ball away from the Orange. They did, and the strategy worked for most of the first half as Eachus carried the load, rushing 20 times for 62 yards.

“I think our game plan worked to a point,” Head Coach Dick Biddle said. “You want to control the ball, but you also want to score points. I think it was working, we just weren’t able to finish the drives and that’s a credit to them. They clamped down and we needed to play perfect football to win. The only thing that bothered me really was that we let them score before the half. But overall the effort and intensity was outstanding, especially from the defense.”

The Raiders also gambled three times on fourth down in the opening half, converting twice, and holding the ball for a whopping 23:39. ‘Gate did, however, also commit seven penalties for 60 yards, disrupting the offensive flow and repeating mistakes made during the previous game against Furman.

“We really were doing whatever we wanted to against their defense when we were staying on schedule and not hurting ourselves with penalties,” Rosnick said. “Our coaches always say that we don’t have plays for 1st–and–20 and that’s what we found ourselves in two times on the same drive.”

The Orange rode the momentum from the first half to a 28-0 lead in the third quarter behind the running of Carter. On the first possession of the second half, Carter busted through a drawn in defense with a 37-yard gain and then scored on a 9-yard dash at 13:28 to push the lead to 21.

An 18-yard run by Eachus on the ensuing drive helped the Raiders move deep into Syracuse territory. However, a 14-yard touchdown pass on fourth down from Sullivan to Rosnick was negated after a review by the Big East officials calling the game. They ruled that Rosnick, who had 10 catches for 84 yards, did not have possession of the ball before going out of bounds. The call certainly gave the edge back to the Orange and affected the Raiders on both sides of the ball.

“Not getting the touchdown there was a big momentum change,” Biddle said. “It was a great catch and it really got people excited. We get that and we’re right back in it. The pressure’s on them.”

“Momentum at that point was critical.” Rosnick agreed. “Playing so well and not being able to capitalize on some points was really devastating to our team as a whole, because it felt like we were moving the ball and getting nothing out of our production.”

As for the questionable call itself, Rosnick had mixed feelings.

“I felt that I had my feet in and possession, so it should have been a catch,” Rosnick said. “I would like to think that the catch would have given us some life, but we need to be able to handle that type of adversity and come out and keep playing. Regardless, it’s a play that I need to make … I shouldn’t leave it up to the refs to determine the outcome.”

Syracuse senior cornerback Da’Mon Merkerson’s interception at the Orange 32 later in the third set up Carter’s third touchdown run. That play was also called into question as he appeared to bobble the ball as he came to the ground, but the referees ruled in favor of Syracuse once again. On the drive, Carter gained 45 yards on four carries and then scored from 12 yards out for a commanding 28-0 lead.

After offensive frustration throughout the game, the Raiders finally broke through early in the fourth with a 13-play, 69-yard drive. ‘Gate put together a few big plays as

Just as they had done throughout game, Syracuse responded to a solid Colgate drive with one of their own. On the ensuing possession, Nassib hit Chew in stride for a 48-yard strike and Carter capitalized his huge game with an 18-yard touchdown run.

Again, ‘Gate came back and marched into Orange territory only to turn it over on downs at the 42–yard line.

“The field gets shorter down there and they try to take things away from you,” Biddle said. “I think a break here or there and it’s a different game. You have a penalty here, a dropped pass there. We had the opportunities to do it, but it came down to the execution on our part and the execution on their part.”

Syracuse made the Raiders pay one final time as they used their balanced rushing and passing attacks to set up another touchdown. Syracuse running back Prince-Tyson Gulley scored on an 8-yard run to complete the rout.

With the homecoming game against Georgetown set for this Saturday, the Raiders need to focus and hopefully pull through with a win. Maybe a raucous home crowd will be just the thing they need after back-to-back road losses.