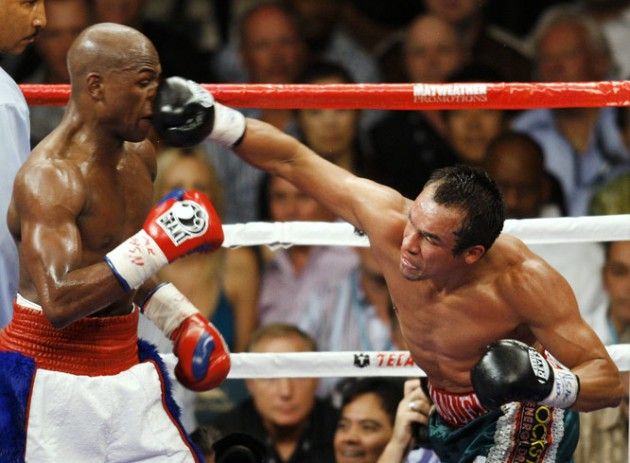 On my list of favorite superstar athletes, Floyd Mayweather is at the bottom. In my opinion, he is everything that is wrong with sports nowadays, especially boxing. While it is obvious that many other boxers have the same faults he does, none of them are in the limelight the way he is, except maybe Mike Tyson.

Mayweather should be the type of athlete that inspires the younger generations in the capacity of a role model. Instead, he flaunts his wealth and at the same time abuses his strength by allegedly using it on the fairer sex. In the past few weeks, Mayweather’s ex-girlfriend Josie Harris has come out and accused him of domestic battery. Mayweather is facing felony theft charges, two felony coercion charges, one felony robbery charge, one misdemeanor domestic battery charge and three misdemeanor harassment charges. If he were to be found guilty of all those charges, he could potentially serve a lengthy sentence of up to 34 years in prison.

One should note that the same woman accused him of domestic battery charges in 2005 only to later confess that she had been lying, but Mayweather has a long-standing reputation as a person who is difficult to handle. The best example of this is his relationship with his father, which has always been rocky. When Mayweather fought Oscar De La Hoya back in 2007, his father was originally going to be De La Hoya’s main corner man, but since he demanded too much money – $2 million – De La Hoya chose someone else. Floyd Mayweather Sr. joined his son’s training camp, but left it a month before the fight, after not being chosen as Floyd Jr.’s main coach and due to comments made by “Money” and his uncle and main trainer, Roger Mayweather.

While Michael Jordan is the athlete every kid should want to emulate, Mayweather is the one every kid should avoid becoming. His nickname itself reflects where his priorities are. “Money” has been criticized in recent months for his cancellation of the mega-fight he was supposed to have against Manny “Pac-Man” Pacquiao in March. The reasons given for the cancellation were that Pacquiao refused to submit himself to Olympic-style drug tests, in which the fighter can be drug tested at any time from the moment the fight is signed to the day of the fight.

Later reports have said that Pacquiao refused because he felt being drug tested too close to the fight might weaken him, but that he would be willing to get tested up to 14 days before the fight. Mayweather’s camp refused his offer, thus cancelling the fight. According to Mayweather’s people, two weeks would still give Pacquiao enough time to cheat through the use of performance-enhancing drugs.

These allegations by Mayweather and his crew have raised a significant amount of criticism towards him, including from more than a few boxing experts who believe that he is using those excuses because he does not want to risk putting his legacy in jeopardy. To this point in his career, Mayweather is undefeated, and a fight with Pacquiao would certainly be a huge challenge to that record. It is hard to blame him, given the Pac-Man’s recent track record against common opponents. While it took Mayweather a split decision to defeat a tired and aging Oscar De La Hoya, Pacquiao did it in dominant fashion, knocking him out in nine rounds. It took “Money” 10 rounds to dispatch British fighter Ricky Hatton. On the other hand, it only took Pacquiao two.

The boxing styles of the two fighters are so different, as Pacquiao’s offensive-minded approach has given him his reputation of demolisher, while Mayweather goes for the more defensive, punch-eluding tactic that ends up wearing out his opponents until he beats them with either a late-round knockout or a unanimous decision. The clash of styles would make this a very interesting fight and experts are having a hard time predicting a winner.

I just hope that the two come to an agreement soon and decide to produce the fight. Not only would the fight be every boxing fan’s dream matchup, but it could also arguably be one of the biggest fights in the history of the sport, right up there with the Duran-Leonard trilogy or the “Rumble in the Jungle” fight between Muhammad Ali and George Foreman. It would also be the biggest payday either boxer has ever had, and probably make more revenue than any other fight in history. My wish is that the fight happens and Pacquiao knocks Mayweather out in eight, but if it does happen, I have a feeling the fight will go the distance.