This Week at the Movies: Easy A 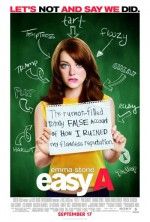 Remember high school? It wasn’t too long ago. Remember all the drama, the feelings of isolation and confusion that plagued our adolescent years? Most of us probably remember the movies we watched, too. We all loved the iconic John Hughes films that helped us understand the fact that we’re growing up and deal with that fact. But that was our parent generation. What about us? That is where Easy A, directed by Will Gluck and written by Bert V. Royal, comes in. Take all the charm and love from a classic 80s teen drama and give it 2010 twist and that’s exactly what you get. Easy A is fun, light-hearted and never takes itself too seriously, but leaves a lasting impression.

Olive (Emma Stone) is your average high school girl. She is smart, witty and a complete nobody. She is troubled by that same feeling of being invisible like any 17-year-old. One day though, as an excuse to get out of a camping trip, Olive lies to her friend about losing her virginity to a college guy. This, however, is heard by one of the school’s gossip queens (Amanda Bynes) and a little lie spreads very quickly. After hearing this, a gay friend of hers asks to fake having sex with him at a party to deter the torments from their classmates. It works, and soon other desperate boys begin to ask Olive for the same thing. She obliges all the awkward boys, but things soon take a turn for the worse. The rumor mill turns nasty, but instead of outwardly denying the claims, Olive embraces her new sexually liberated persona.

She continues this only until her lies really start to hurt people and she becomes consumed by it. She tells the truth. Happy ending for everyone. The story isn’t the most complicated or deepest one out there, but it sure is fun. Between Olive’s snarky dialogue, her odd but loving parents and just the complete ridiculousness of the situation, the movie takes a good vibe and runs with it.

When it comes to the production, Easy A is pretty standard. Nothing too interesting when it comes to the cinematography or lighting. The most interesting aspect, however, is the use of technology as a major aspect of the film. Olive tells her story and confessions through a webcam. The high school communicates and the rumor spreads through texting, Twitter and Facebook. While often a clichéd tactic used when portraying our generation, it works surprisingly well and is never too overbearing here. Plus, the movie boasts a pretty excellent soundtrack, including many songs we recognize from those 80s movies. It’s a brilliant homage.

There’s very little reason to not see Easy A. It’s got just about anything you could ever want when you’re looking for a good time at the movies: a good story, good music and hot lead actors. It’s a movie that all of us can relate to on some level, and who doesn’t want to laugh at how stupid and ridiculous high school was? Go out and see this movie. If you don’t, then you’re seriously missing out.