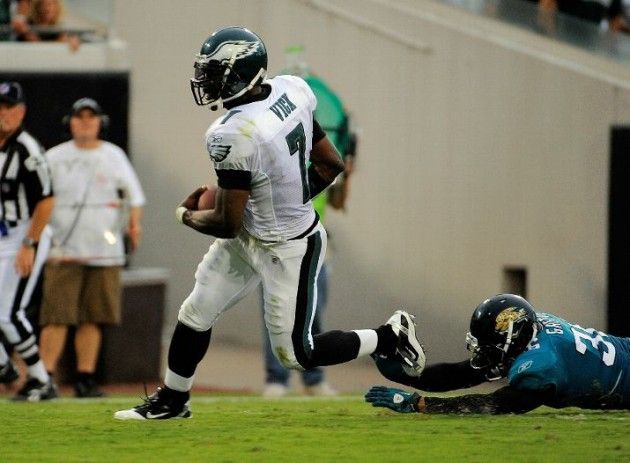 Dogfighting. Bankruptcy. Prison. Since 2007, Michael Vick’s life has been a self-inflicted, living Hell. He has spent the last three years of his life being crucified by the media and the public alike. Because of his involvement with Bad Newz Kennels, people from all parts of society called for him to be banned for life

Fast-forward to 2010. After 21 months in federal prison and a year as the backup quarterback for the Philadelphia Eagles, Vick finally has an opportunity to put the past behind him. After Kevin Kolb went down with an injury in Week 1, Vick was thrust into the Eagles’ starting role, and he has shone more brightly than at any point in his career.

In two games as Philadelphia’s starting QB, Vick has carried his team to two big wins, inspiring hope for a team and fanbase that looked to have none at the start of the season. In these two games, Vick has passed for 575 yards and 5 touchdowns, while rushing for 67 yards and a touchdown. Not only is he contributing impressive performances after, essentially, three years out of the game, he has done so exclusively on the road. Sure, the games were against Detroit and Jacksonville, but they were incredible displays of talent nonetheless. Vick’s play has apparently elevated him to a pretty high rank in the NFL quarterback echelon – an ESPN SportsNation poll puts him well ahead of Donovan McNabb and Ben Roethlisberger when fans are asked, “Which player would you prefer as your team’s

Additionally, Vick has added a new dynamic to the Eagles’ offense, one that would never exist under the lead of the relatively immobile Kolb. Instead of focusing on the, well, less-than-explosive skill players on the Philadelphia offense and easily shutting them down, opposing defenses now have to assign a single player to monitor Vick. Failure to do so will lead to him breaking free for easy touchdown runs, as he did in the third quarter against the Jags last week.  He might not have the same speed as the Madden 2006 version of himself, but he still has the ability to bust a huge run unlike any other quarterback in the league.

What’s most surprising, however, is how astonished people are at Vick’s play. It seems that, in Vick’s absence, everyone forgot how good he was. Remember, this is the same guy who, in his second full year as a starter, carried a mediocre Atlanta Falcons team to an 11-5 record and a place in the NFC Championship game. In 2006, the last season before his prison term, Vick lit up the league, even though Atlanta only finished 7-9. Not only did Vick throw for 2,500 yards and 20 touchdowns – he also ran for over 1,000 yards, breaking the single-season NFL record for rushing yards by a quarterback.

When stars are absent from their sport for an extended period of time, especially in the NFL, history has shown that they usually come back stronger and more motivated. Vick’s case is reminiscent of Ricky Williams, though the two were out of the league for very different reasons. Williams was suspended from the league for the 2006 season after missing a drug test, and really did not fully return to the game in both mind and body until 2009. Williams, like Vick, was thrust into a starting role after an injury to a young starter – in Ricky’s case, Ronnie Brown – and quickly resumed his domination of old. Williams ended 2009 with 1,121 yards rushing – his highest total since 2003 – and 11 touchdowns, the second-most of his career. Williams was also, like Vick, criticized by the media, admittedly for reasons far less serious than Vick.

Vick’s success will certainly draw the ire of numerous detractors. Animal rights groups will still protest his games, and they most certainly have a right to do so. Talking heads like Jay Mariotti (well, maybe not him anymore), will get on their moral high horse and continue to berate Vick for his past actions. What Vick did was egregious, to be sure, and horrible for the image of himself, the league and the Atlanta Falcons organization, but what’s done is done. Vick has served his time and now has a chance to move on from his dark days, restoring some polish to the legacy he was once building. And we will be here to watch and be awed, once again.