This Week at the Movies: Cyrus 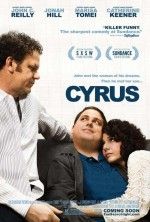 Cyrus is not what you would expect. It is not an overarching love story filled with conceit and larger-than-life plot arcs. It is not a slapstick comedy. It does not proclaim to explain macro human psychology. Cyrus is a quaint, personal, little slice of the lives of three characters right at the moment of their collision. It is life filled with complexities, contradictions and randomness, but with an evocative beating heart.

Cyrus opens up with Jamie (Catherine Keener) walking into John’s (John C. Reilly) house to inform him that she’s getting remarried. John and Jamie divorced seven years prior. John has lost all his self-worth and spends his days in a messy apartment, masturbating to loud hip-hop music. Jamie meanwhile has clearly moved on and portrays an image of complete security and comfort. John is invited to the engagement party where he meets Molly (Marisa Tomei), and they hit it off. They enter into a relationship and John immediately begins to get clingy. Enter Cyrus (Jonah Hill), Molly’s 21-year-old son who seems to have a very intimate, albeit non-sexual, relationship with Molly. The rest of the movie consists of the physical and mental warfare that erupts between the two men who each want the biggest share of Molly’s attention and affection.

Make no mistake: Cyrus is no mindless comedy with booby traps and banana peels and Red Indian costumes. The conflict between the three main characters is very real: sometimes overtly dark, sometimes gut-wrenchingly funny and sometimes just plain weird and unnerving. The conflict never seems forced but is so unpredictable that you’re never quite sure what to expect. Cyrus is a ticking time bomb throughout the movie with a funny, creepy, insecure, unnerving and ultimately very palpable characterization. Hill immerses himself in the role and still gives it a distinctly “Jonah” touch. Reilly as John takes a character fresh out of cookie-cutter Hollywood romantic comedies and gives him a breath of fresh and vitalizing life. You do laugh at John’s clumsiness and antics, but you never stop caring for him. Marisa Tomei is well…Marisa Tomei. She engages her role with almost lazy dexterity though she is just a supporting character. Hill and Reilly share the big punches in this movie. Keener is spectacularly under-used and restricted almost exclusively to “music-video sequences” that show her laughing good-naturedly.

The quick zoom-ins and zoom-outs a la The Office or The Hurt Locker, can be quite tiresome. The background score sounds like it is straight out of popular advertisement jingles. Also, the cut-sequences of the characters looking deep into each other eyes while their dialogue is played as a voiceover can be a little cheesy.

But overall, Cyrus was an interesting film experience. It is not an overly ambitious project which producers hoped to turn into a 3-D film. It is not a traditional feel-good movie that caters to the lowest common denominator. It is a quirky movie that depicts the awkward conflicts between three interesting people. While these conflicts do start to work themselves out at the end, they are anything but resolved, much like real life. Cyrus is a movie which takes the concept of “indie” a little further than Juno. If that seems like your cup of tea, I recommend you check this out.