The Ghosts of DKE’s Past 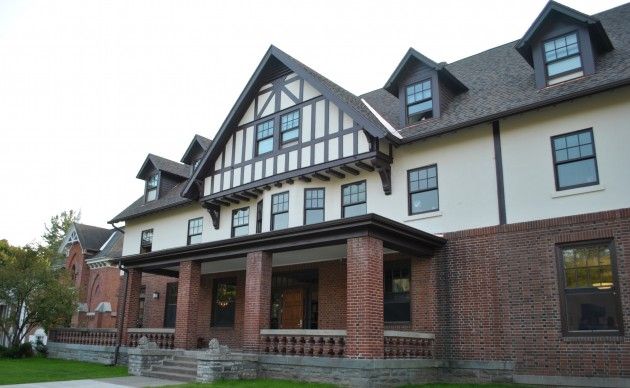 What makes tradition or prestige special? Colgate has much of both and I will save that for another Maroon-News issue, but combine them with secrecy and rumors and the “unknown” and you get a pretty intriguing picture. (Which is why I used it as my introduction of course.)

I don’t claim to know many of the details surrounding the University’s acquisition of the old Delta Kappa Epsilon (DKE) house, but I can say I was more than sad when I did find out it had finally happened.

I can still remember one of my first days at Colgate as a freshman, walking to town with my newly-formed pre-orientation friends, heatedly debating which Broad Street houses were best. Yes, DU’s columns were impressive, Gamma Phi’s flowered wallpaper seen through the windows was pretty enough and Beta was rumored to be having this thing called Beta Beach (I claimed instant bragging rights for having been already invited on Facebook via a senior), but nothing in my mind could shake the unexplainable aura of a boarded up near-frat-mansion that came with a mysterious history.

It had all of the drama and passion of a good story: the good versus evil motif of the steadfast Greeks holding out as long as possible in the losing battle against the big bad administration’s attempt to buy all of the houses. I was proud of the DKE members – it seemed like just the right thing for which I myself would fight. After all, my libertarian values at my core tell me freedom and independence are, in a heartbeat, worth it (it hasn’t been only once that I was accused of being an usurper of a power-wielding body). And even if you’re not as fired up about basic human rights as I am, who doesn’t love a good rivalry?

It was gut-wrenching to read the Class of 2014’s Facebook threads about living in 110 Broad Street – now the LOFT house for first-years – for a number of reasons.

First, their concerns were aimed at how far away from the rest of campus they were – so far from the other new freshmen, from their classes, from Frank. My response: Please. If Gate House can get over it, you can too.

Second, as I mention in my tours of campus to prospective students, we have a reverse hierarchy, in a way, of living arrangements: first-years live up the hill, and as you get older, you move down the hill. It’s a sign of independence, in the Admission Department’s eyes, to gradually get your own bathroom, then get your own kitchen, then be allowed to live off-campus (and so on). But I see it as a rite of passage of getting older to live down the hill. Being older always has a certain cachet – you have taken more classes, know more people and have been to more parties.

Doesn’t the random placing of first-years on Broad Street undermine both of these impressions?

Third, not only are they living in 110 Broad, they are living in the old DKE house. Wait, let me say it again: They are living in the old DKE house. Whether it is rumors about Phi Tau brothers in the fifties digging a tunnel to the temple or today’s infamous DKE “Apple Pie” or even the national organization’s ties to the also-much-talked-about Skull and Bones Society, it is the rumors that are the most fun to feed on. Didn’t some part of you last year want to know what items the DKE brothers wanted returned so badly they would take out an ad in this very newspaper stating as much? It is this very discussion that is at the heart of all things beyond our knowledge.

I speculate that it is just the fact that we don’t know that is the reason we have the feelings we do – at the very least curiosity – about such things; what fuels gossip but hearsay, opinions and the topic we enjoy best: other people. So what kind of people are the DKEs to prefer their house closed up and standing empty, impressively solitary, to giving up what they believe in?

Just as my high school senior self found a way to sneak up to our school’s “forbidden third floor,” my college self would have loved nothing better than to find a way to do the same here (all hell, high water and ghosts to be found inside guaranteed). Upon saying as much when returning to campus this year, my father suggested I go inside now that it’s open. He even said he would pretend to be an old DKE alum as a good cover.

But it’s the fact that I wasn’t allowed inside in the first place that made me want to do it. And more than that: going in now would ruin my imagined romanticized view of what I would see.

So while the first years need a place to live (for now), I believe the DKE brothers should be allowed to maintain possession at least of that imagined view, that gossip, that mystique. Especially as sophomore recruitment approaches, Greek energy runs high. I would have been proud – now that I, too, as a sorority sister, am a part of this community – to continue calling the old DKE residence one of the Greek houses today – if even only to give them respect due for making their, as my roommate terms it, “creepy [expletive] temple” seem glamorous.