This Week at the Movies: Wall Street – Money Never Sleeps 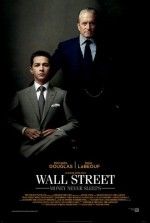 Oliver Stone has his heart in the right place. I don’t know about his head, but his heart is certainly in the right place. Make no mistake: Wall Street can be smart at times. But Stone gets too bogged down in making this movie accessible. He adds all the traditional “masala” (as we call it in India) to appeal to the masses. And this can be quite suffocating. But you never lose your sympathy for the filmmaker. Stone is divided among making his characters real, appealing to the legions of people not acquainted with the financial world, making clear antagonists and protagonists so people can relate to the movie, castigating Wall Street excess, creating emotional arcs and chronicling the worst recession in the last few decades. So, cut him some slack. Sure, he didn’t make a masterpiece, sure it’s not as good as the first movie and sure it could’ve been a whole lot better. But hey, we all have our off days.

Gordon Gekko (Michael Douglas), who was incarcerated at the end of the first movie, gets out of jail and finds that there is no one waiting for him. In the next years, he writes a book, goes on speaking tours and is interviewed on CNBC. Jake Moore (Shia LaBeouf) is a young genius who works for Keller Zabel, a firm run by Lewis Zabel (Frank Langella.) Jake Moore believes that fusion reactors are the next big thing, and he hopes to create a name for himself by backing it before anyone else. Keller Zabel is sitting on a huge amount of toxic debt, and Bretton James (Josh Brolin) spreads rumors about this debt, causing investors to lose confidence in Keller Zabel. Lewis Zabel decides to take his life by jumping in front of a subway train and Moore is devastated, since Zabel was his mentor. Moore decides to avenge Zabel but realizes that the money he promised his scientist friend at the reactor is now non-existent. James takes Moore under his wing, and Moore continues believing in his fusion dream. Moore is engaged to Winnie Gekko (Carey Mulligan), the daughter of Gordon Gekko. Moore tries to patch up the estranged relationship between Winnie and Gordon Gekko. All of a sudden the financial crisis hits and throws all of their worlds into a tumble.

The movie is kind of iffy in its efforts to succeed on a human emotional micro level within the context of the macro level financial meltdown. It’s an honorable cause, but Wall Street is neither here nor there, which can be quite irritating. Frank Langella is easily the best actor, but he’s only on screen for 10 minutes. The plot settles for some cheap melodrama and easy solutions when it really could’ve achieved so much more. Wall Street makes you aware of its enormous potential at every turn, and then fails to achieve it almost at every turn.