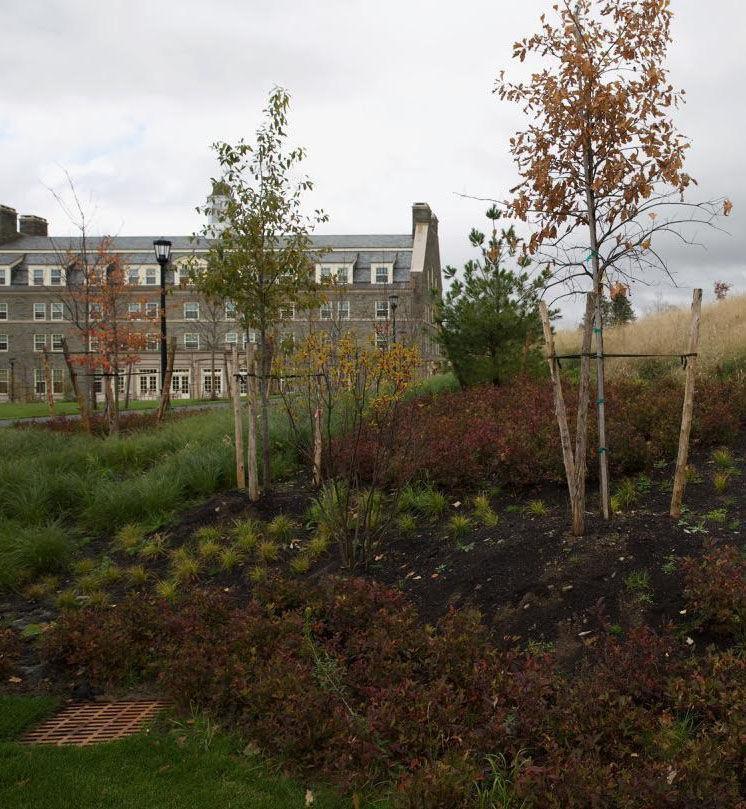 A University rewilding project brought a variety of plants to the upper hill behind the new residence halls, Pinchin Hall and Burke Hall. The project began in conjunction with the construction of the new residence halls and is part of Colgate’s larger plan for landscaping upper campus. The excavation and construction of Burke Hall and Pinchin Hall removed a large amount of greenery in the area, allowing for the rewilding project.

According to Landscape Project Manager of the Office of Buildings and Grounds Katy Jacobs, the rewilding is more than simply replanting what was there before.

“Because the new dorms were constructed in a previously undeveloped part of campus, it was important that the landscape was restored as much as possible and transitioned smoothly to the more natural, open spaces at the top of campus,” Jacobs said.

Rewilding is a form of environmental conservation that intends to protect natural processes and native wilderness. The project aims to be conscious of how the campus landscape performs as a part of a larger ecological system. Around 200 trees, 200 shrubs and over 5,000 perennials have been planted so far. There are 21 different species of trees present and all plants are long-lasting and are either native or adapted—an adapted plant being one that is neither invasive or native, but thrives in the area.

According to Jacobs, while the planting effort has been completed, the new landscaping will require time to fill out the space and for the trees to form a mature canopy. Beyond the rewilding, the grasslands beyond the dorms have been designated as meadow areas, and paths have been made from the new dorms to the cross country trails and old golf course.

“Large development projects of this caliber can often treat the surrounding environment as an afterthought, but this project prioritized thoughtful consideration of the campus landscape as part of the process. I think this demonstrates Colgate’s commitment to being good stewards of the environment and to making investments that will benefit students and the greater community for many generations,” Jacobs said.

Sophomore resident of Pinchin Hall Hua Zheng said he feels the project is aiding the aesthetic of the newly developed area of upper campus.

“The project certainly helped make my dorm more aesthetically pleasing,” Zheng said. “My favorite part is that the school is trying to do more environmentally friendly things. The school reached carbon neutrality this year, but I’m glad that they are not slowing down their effort to help the planet.”