Writing with the Bulls: Novelist Talks Finance at the Bookstore 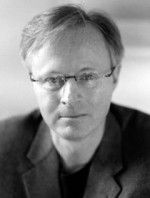 “Wall Street characters are fun,” author Norb Vonnegut told his audience at the Colgate Bookstore on Thursday, April 1 where he gave a talk on his first novel, Top Producer.

Norb Vonnegut, a novelist, current Colgate parent and twenty-year veteran in finance, knows a good bit about the people who inhabit the famous street of the deal. His novel, Top Producer, is a fictional thriller that immerses itself in the people, language and culture of Wall Street.

In his talk, he wanted to answer three questions for the audience. What’s Top Producer about? What’s it like to be an author? Why did I write the book?

A member of the Colgate Bookstore staff had earlier introduced the author and his book, noting that Top Producer had the “coolest murder scene ever” and riveting vehicle chase around Central Park. In answering the first question, Vonnegut dove right into the drama and suspense of his thriller, framing the catastrophic turn of events that generated this Wall Street foul play.

The story involves a murder at a high society party flush with Wall Street money and held in the New England Aquarium. The festivities are interrupted by the sudden death, “in spectacular fashion,” of Charlie Keleman, a stockbroker. Desperate at the discovery that Keleman’s entire fortune disappeared with his life, his widow turns to Keleman’s friend Grove O’Rourke for help. As O’Rourke attempts to hunt down the lost millions, the insidious elements of this cutthroat world of wheeling and dealing reveal themselves. It is a novel fascinated with but also wary of the domain that finance culture has made for itself.

In discussing his experience as an author, Norb Vonnegut, the fourth cousin of renowned writer Kurt Vonnegut, struck a humble note. Before praising himself, he thanked his Blackberry. Relating a funny incident, Vonnegut described walking out of his hotel room late one night to conduct an interview across time zones. Unaccustomed to his status as a newly published author, he did not know how to react when an apparent fan began to point him out her friends, jabbing with her finger. However, the embarrassment of fame turned out not to be the issue as the bed-headed author clad in disheveled pajamas finally overheard her say, “Look, the poor man’s homeless… oh, wait, nevermind, he has a Blackberry.” As cousin Kurt would say, so it goes.

Moving from the popularly labeled Crackberry to the true source of his inspiration, Vonnegut addressed his final question: “Why did I write the book?” Here he was a bit searching.

“It was not out of some unbridled passion. And it wasn’t that it was one of those things that I knew that I had to do since I was a kid – although that was a part of it,” Vonnegut said. “Really, though, I think it was an exercise in self-defense.”

By this he meant that writing, which he described as the process of making yourself a hermit in front of your laptop, served as a “great escape.” In the “sensory overload” of Wall Street – CNBC and Fox Business blaring on the big televisions, 500 emails a day, analysts endlessly jabbering on the talkbox – it seems that it helps to take a step back and try to make some sense out of all of it. Piecing together the many aspects of this place that Vonnegut came to know and love for over twenty years, he created a rich and zealous depiction of Wall Street and the finance industry.

When an audience member asked what advice he would give to a college student considering finance, Vonnegut responded, “Read this book.”

For the Colgate student with an interest, check out Top Producer and who knows? Wall Street might turn out to be “fun” after all.