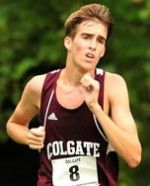 Both the men’s and women’s outdoor track and field teams resumed their seasons on Saturday April 3, and each team experienced tremendous amounts of success at separate meets, both on an individual level and a team level.

The women’s squad travelled to Princeton, New Jersey to take part in the Sam Howell Memorial Invitation. The team once again had several athletes perform well individually, this time translating into a fantastic overall finish. The meet was once again highlighted in part by the efforts of star Sophomore Elise DeRoo, who placed second in the 5000-meter run, trailing first-place Melissa Newberry of Princeton by just .38 of a second. DeRoo’s time of 16:35.61 easily beat her own previous Colgate school record, set just two weeks ago in South Carolina. Following her performance, DeRoo is now ranked 35th in the nation in the 5000-meter event. DeRoo called her performance “exciting” and “quite a thrill.” Sophomore Kelly Cattano placed 16th in the event, but ran a personal-best time of 17:50.18. The time is the third

fastest in the Patriot League this season.

In the 200-meter dash, Miller placed eleventh overall with a final time of 25.85. In the 1500-meter run, Raider sophomores Kendall Lyons and Chelsea Burns placed 14th and 15th, respectively. Lyons finished the race in 4:36, with Burns trailing by just one-tenth of a second. Both of the times were personal-bests for the runners. The Raiders return to action next weekend on April 9-10 when they travel to Bucknell for the Bison Outdoor Classic.

“We’ve stacked two workouts back to back on Monday and Tuesday, and we’ll be backing off slightly on Wednesday and Thursday in hopes of going into the Bucknell meet fresh,” DeRoo said.

The men’s track and field team travelled to Annapolis, Maryland to face off against American and Navy in a tri-team meet. Host Navy took home first place in the meet with 205 points, trailed by Colgate with 59 points and American with 36 points. Sophomore Mitchell Boucher and junior Michael Lam placed fifth and sixth, respectively, in the 3000-meter steeplechase. Boucher crossed the line in 10:09.12, followed by Lam, who finished in 10:14.88. The 4×100 relay team placed second in the event earning 5 points for the Raiders. First-years Jason Hodge, Michael Nieliwodski and Preston Hoge, and junior Patrick Galasso teamed up to finish the race in 45 seconds.

In the 4×100 relay, Colgate’s ‘A’ team also placed second with a time of 3:23.20. Juniors Dan Schwaibold, Jonathan Knowlton and Andrew Smith, and Sophomore Tim Metivier were rewarded with five team points for their collective performance. Galasso also had success in the 100-meter dash, finishing the race in 11.45 seconds and earning 4 team points for the Raiders. In the 1500-meter run, junior Dan Gleason and Metivier both earned points for Colgate. Gleason finished the race in 3:52.6, earning 2 points, and Metivier finished in 4:09.03, scoring one point for the team.

In the 800-meter run, Knowlton and senior Jeremy Fisher placed second and third, respectively. Knowlton’s time of 1:53.78 earned him 5 team points, while Fisher’s time of 1:54.55 earned him 4 points for the team. Senior Phil Natoli was the only Raider to place first overall in an event, winning the 400-meter hurdles. Natoli took home 10 team points, finishing the race in 53.85 seconds. Hoge also finished well enough to earn three team points, placing fourth with a time of 56.45 seconds.

The men’s team will travel with the women’s next weekend to Bucknell, where they will face off against several other Patriot League foes for the first time this outdoor season in the Bison Outdoor Classic.