Peace, Love and Rain at Gatestock 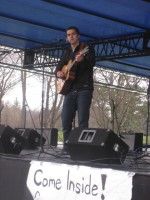 “You’ll be my only/ Even if the sky is falling down,” sang junior Liz Barnett of the student band Jango Radley, from Jay Sean’s “Down,” at the Gatestock Festival on Saturday afternoon.

Fittingly enough, at that moment, the sky did appear to be falling down as a gusty rain and even some hail blanketed the festivities – or what was left of them at Whitnall Field. Gatestock, held this year for the first time, began like a kiddie carnival, with inflatable bouncy houses and cotton candy, but ended almost defiantly. A stone’s throw away from Phi Delta Theta fraternity’s then defunct Jail and Bail for Charity cross-frame prison, the last performers of Gatestock took to the stage, despite the cold and rain, and made some, as Gatestock’s slogan goes, “‘gate and music.”

Gatestock was presented by Broad Street Records who set out with the goal of creating a student-led music festival on the weekend before Spring Party Weekend. Music acts ran throughout the afternoon on a stage set up in Whitnall Field and a smaller stage in Donovan’s Pub.

In the bedlam of the first couple of hours, Gatestock nonetheless put out music. Musicians who had never played together before jammed with each other on stage. A few acts took the opportunity to move from Donovan’s Pub to the roomier setting of the big stage. J Young used the new space to launch into some energetic and raunchy hip-hop. Later, the exposure of a bigger stage lent new perspective to first-year Caitlin Grossjung as she sang some well-known pop ballads.

Some order returned to the festivities as the Colgate Rock & Roll Association for Brothers and Sisters (CRRABS) confidently took the stage for their scheduled set. The Colgate student rock and roll organization played pure rocker’s rock. Their session featured much guitar and keyboard-synthesizer grinding and even some smooth saxophone wails. Sophomore Andy Peng, who originally conceived the idea for Gatestock, starred prominently in the group. As it was his brainchild that created this throwback festival, Peng’s band helped him trot out some classic Woodstock anthems. Most memorable was CRRABS’s recreation of Jimi Hendrix’s iconic Woodstock performance of “The Star Spangled Banner.” The crackle of guitar distortion warped the melody of the national anthem into the hiss-pop of Fourth of July fireworks and Francis Scott Key’s “the bombs bursting in air.”

Soon the rain began to pick up as Jango Radley took the stage. Upholding their title as the student band that will be opening for Fabolous at Spring Party Weekend, in their performance, Jango Radley delivered everything that could be wanted out of a college band. They played a set of standout, familiar party songs, but managed to surprise and entertain. Senior Liz Barnett’s voice has a clearness and sturdiness that gives strength to even some of the most seemingly worn-out pop songs. The instrumental accompaniment provided a tangy groove of white-boy soul that nicely couched Barnett’s singing. The band even sang some on their own.

On the small stage inside the pub, the more intimate confines made for smaller, cozier performances. The University Chapel Band offered some Christian rock worship. Away from the big stage, rapper J Young bounced out a few Drake covers as well as some compositions of his own, including one about jump roping and venereal diseases. Indecisive, so named for their inability to come up with a band name, showed off the technical and improvisational ability of a band that, as one member confessed, had only practiced once before their gig.

Poetically Minded read out slam poetry that reflected on difficult fathers and kinder lovers. Sophomore Andrew Wylie strummed on his trusty guitar as he crooned out a suave rendition of Taylor Swift’s “You Belong with Me.” First-year Mclain Roth expressed teenage angst, heartbreak and affections in piercing pop covers and original compositions. Aquapod in a whimsical reverie belted out songs about twinkling, somehow phallic, stars and their own futile dissatisfactions.

“Sometimes life just puts you on the small stage,” Aquapod told the audience. In a similar spirit, first-year Scott Reu sang a song about the things you can do with a chair.

For the hardy souls who stuck out the rain and the devoted ones who showed up for a friend’s small stage performance, Gatestock probably meant a lot of things that a music festival aspires to be. As audience members danced to the music— and slipped a couple times— in the rain and mud, Gatestock was not all that different from Woodstock, which suffered from similarly trying weather. After this test, certain people will be asking if, in terms of money and effort, Colgate is really up for another Gatestock. As for this author, like Jango Radley singing from that Jay Sean hit single, “I’m down like the economy.”