Where the Art Is: Kirkland Arts Center 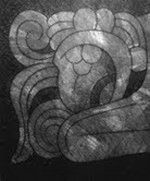 Just beyond the oak doors of an abandoned church that sits on the village green in Clinton, NY, there is a wealth of artistic imagination. Kirkland Arts Center (KAC), which operates from the town’s old church and adjoining barn, is one of the oldest multi-arts organizations in Central New York. In fact, next year marks the Center’s fiftieth anniversary. Since opening its doors in 1961, the Kirkland Arts Center has continually provided a venue for music and theater as well as gallery space for the visual arts, and today they offer over 150 art courses and workshops. In their front gallery space, the renovated hall of the old church, KAC exhibits a rotating selection of regional and non-regional artists. In conjunction with the exhibition schedule, KAC director Annette Clarke chooses new works by very local artists (usually from the Clinton-area) to hang in her office, or the so-called “director’s gallery.”

Currently on display is the work of John Loy, an artist who has exhibited widely throughout the region. His “Mayan series” is a variation on his typical techniques of abstraction and collage. Inspired by several trips to “Mexico, Belize, and Guatemala,” the artist seeks to “translate” the visual texture of Mayan iconography. Working within layers of symbolic meaning, Loy maintains an intentional abstraction that is seen in his other works. In this series, the textural materials create a depth of color and light. The figural and graphical designs i often exude an internal glow, with the multi-layered gold, orange, and red hues playing off the rich chocolate background. Loy’s paintings serve as a fitting compliment to the photographs and drawings of Mother Elisabeth Czwikla and Rosette Schureman, whose work flanks the halls of the main gallery.

Like Loy, Schureman’s artistic inspirations come from a dedicated “looking” – that is looking, again, at what is being overlooked. She speaks of her paintings and drawings as “unconventional” landscapes, meaning that she reconsiders traditional composition. In works like Thicket, for instance, the surface of her canvas appears to be an abstracted arrangement of acrylic – with dark purple and rich-blue lines askew in a field of light tan color – but the title belies the abstraction of the surface, suggesting just how intricately patterned a simple element of landscape can be.

Similarly, in Rhythm in Blue and Gold, Schureman continues to abstract the qualities of color and texture, making the “blue and gold” subject of her painting virtually unrecognizable. Her reference to rhythm responds to a feeling that her work is akin to jazz, which uses that same notes as traditional music but reconfigures them to create an entirely new experience.

If Schureman invests an interest in the natural landscape, then Mother Elisabeth Czwika looks, instead, at how the natural interacts with the artificial. In this exhibit, she displays photographs of flowers, whose close perspective enact an intimate viewing just like Shureman’s work, but also photographs of bright orange rust, or the metallic edges of a car.

That she finds such beauty in the mundane is an affirmation of those elements of art that she prizes most: “colors, shape, and texture.” No photograph better embodies this vision than Green is Life, which is a close-perspective shot of a lime green bricks, with a green plant sprouting in between the mortar and a metal bar juxtaposed to the left of the canvas. It is in this unique arrangement of parts, in the interaction between nature and construction that Mother Elisabeth finds harmony.