Midnight Movie Screenings: Coming to Theaters Near You 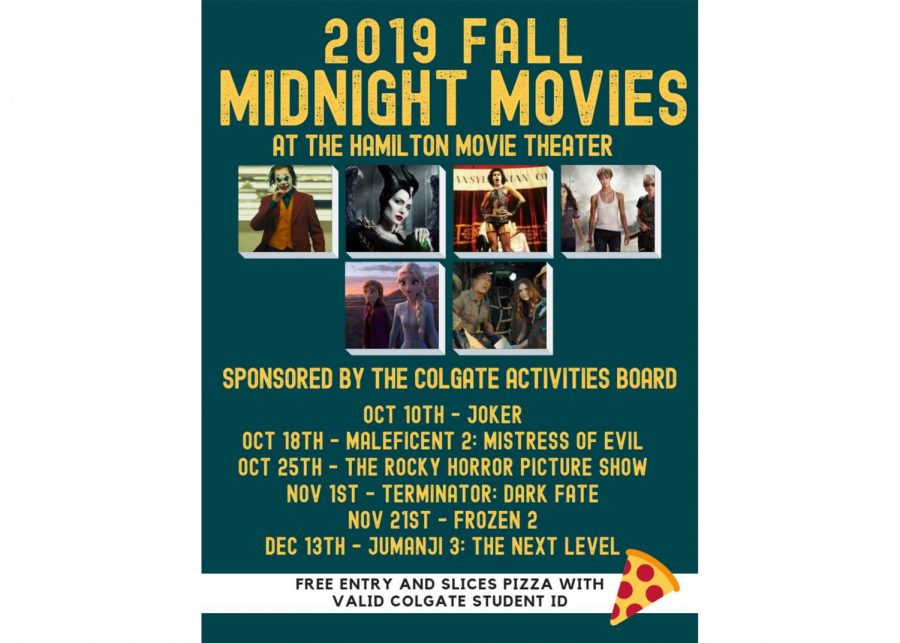 The CAB’s midnight movie screenings offer  free movies, pizza and the company of your peers. Here’s a sneak peek at the big hits you can expect this semester:

The hype has been overwhelming with DC’s first standalone film, which is also the first Batman-related film to receive an R-rating. The story is largely original on the part of the screenwriters and features the Joker as a failed stand-up comedian. Joaquin Phoenix’s performance has already picked up critical acclaim, and if anyone can match Heath Ledger’s skills to any degree, it’s him. The movie premieres October 4, but you can see it for free (or again) on October 10!

A sequel to the 2014 film where Disney switches up their usual narrative of knights in shining armor and princesses, this series stars a villain instead: Maleficent from Disney’s Sleeping Beauty (1959). Angelina Jolie is perfect for the role, and the dark tone and twists of the first are also present in this installment. The narrative takes place during the impending wedding between Aurora and Prince Phillip, whose union will only cause more unexpected divisions.

As a Halloween classic, it’s a tradition at the theater to show this 80s cult classic every year. For those who don’t know, it’s an interactive experience. I won’t spoil it, but get ready for chants, props, and perhaps some bewilderment. Go at least once in your four years here!

The sixth installment of the Terminator franchise, this film reunites the characters the “Terminator,” Sarah Connor and John Connor after a gap of 28 years. According to creator and producer James Cameron, Dark Fate is set in the original timeline, rather than the alternate timeline of the franchise’s two previous movies. A blend of sci-fi and action, the once-enemies band together to fight for their own future as well as the ones of others.

Released six years after the phenomenon of the first, the events of the sequel only take place three years after. Unanswered questions and mysteries such as the origin of Elsa’s powers will finally be addressed. Many could not simply “let it go” until discovering the sequel was confirmed. A talented cast, great animation, and catchy tunes seem to ensure that this film will be a family-friendly venture for all ages.

Is a sequel to the 2017 film really necessary? No. Do we care? Also no. Jumanji: Welcome to the Jungle was an absolute blast—a surprising adventure comedy that grossed over 950 million dollars. The film features the same teenagers who re-enter the game to save Spencer (Alex Wolff) with the addition of his grandfather (Danny DeVito) and friend (Danny Glover). It’s by no means a holiday movie of any sorts, but it may be just what students need entering finals and the end of 2019.