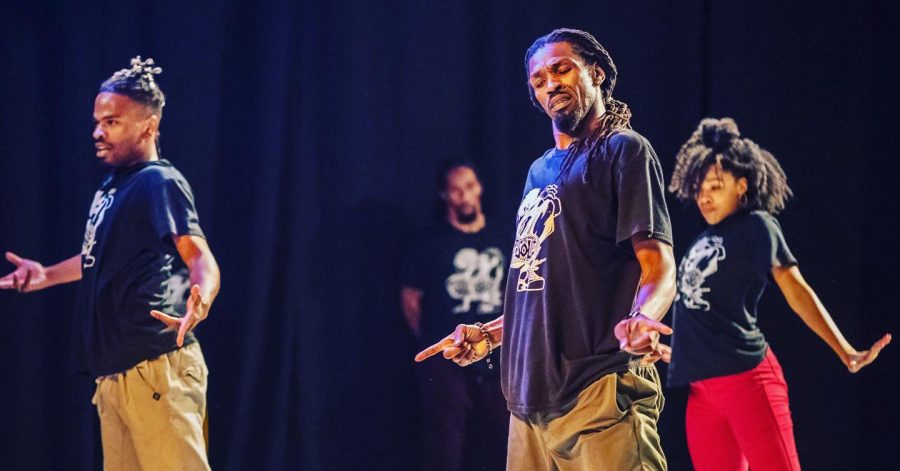 Dancers Kyle and Dinita Clark held a lecture and demonstration, “Hip Hop Histories,” in the Memorial Chapel on Friday, October 25 as part of a series on hip hop sponsored by CORE 152. Both teachers and performers with Philadelphia’s Just Sole Dance Company, the two wove demonstrations of different street dances in and out of a lecture on the history of hip hop.

At the beginning of the lecture, Kyle defined “hip hop” as a cultural umbrella term, its central elements being dance, graffiti and an MC or DJ.

“The fourth element, knowledge, is what has allowed it to last as long as it has,” he said, passed down mostly orally through generations.

“As a genre of music,” he explained, “hip hop consists of samples of funk music, the addition of a beat and an MC.”

The lecture moved through the birth and evolution of hip hop, beginning in the Bronx in 1973. Kyle credited Jamaican-American DJ Kool Herc as the father of the genre, hosting a party for his niece on August 11 of that year. People from all boroughs of New York City came to celebrate a recent truce between gangs, marking the birth of hip hop as we know it. From the Bronx, hip hop began to spread across the country, and people developed dances and styles distinct to their cities. In tandem with Kyle’s historical account, Dinita demonstrated social dances from Los Angeles, Northern California, Chicago and New York City, among others.

These “social dances,” or gestures local to different areas, are more than just a dance.

“These are movements everybody in the neighborhood can do,” Kyle said, “bringing communities together through dance.”

As he detailed the origin of dances such as the Jerk and the Cabbage Patch, as well as integral movements such as locking and popping, Dinita demonstrated the movements by his side.

Throughout the talk, Kyle and Dinita explored the way dance has served as a form of expression for those in marginalized communities.

“Throughout history, hip hop was the recycling of negative energy into a positive result,” Kyle said.

Hip hop historically has given a voice to those whose voices have been silenced. This style has been an integral part of African American culture and has played a big role in these communities across the country, voicing frustration towards stifling racism and providing an outlet to voice these struggles.

“It was the body in protest,” Kyle said.

Kyle emphasized the unifying power of these dances not only in America but across the world, describing his experiences on a recent trip to Nigeria where he witnessed different styles of dance that echoed hip hop movements back home. When asked by an audience member how hip hop has been influenced by Puerto Rican and Carribean culture, Kyle highlighted how the connection was created,  as these communities have largely existed within the same spaces as African American communities.

As hip hop transformed from neighborhood social dances and rap battles into what is now a billion dollar industry, Kyle and Dinita emphasized the importance of the distinction between participation and appropriation.

“A lot of people like to dress the part but know nothing about the culture,” Kyle said. “You can’t fake the funk.”

In order to appreciate and participate without falling into the trap of appropriation, Kyle recommended several ways to support hip hop and the people behind it.

Supporting hip hop artists and dancers by attending their events is one way of appreciating the culture without appropriation. Another way to participate positively is to buy, not download, hip hop music, as the artists are only compensated for their work when listeners pay for their music. The third thing Kyle suggested is for artists to cite influences, attributing their sources of inspiration to those that came before them.

“Studying hip hop really puts us in touch with the power of art,” Lecturer in Philosophy Hibi Pendleton said.

The CORE 152 faculty added hip hip to the Challenges of Modernity curriculum several years ago. Part of Colgate’s Core Curriculum, the class explores the interplay between art and culture. Hip hop is current while having been around long enough to trace its influences and evolution.

“As Kyle Clark said on Friday, this art form that started as a local response to adversity is now a global cultural movement,” Pendleton said.

Kyle and Dinita have also worked with DDT, one of Colgate’s hip hop dance groups, several times in the past, and held a week of workshops during their most recent visit to Hamilton. Dancers from DDT participated in the presentation by demonstrating three different dances taught to them by the Clarks, each embodying different eras of hip hop.