Second Take: How to Train Your Dragon 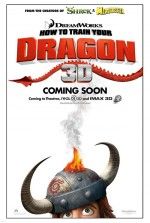 So remember how you were watching Avatar and thinking to yourself, “Gee, this is a beautiful movie, but I wish there were a bit less self-important irony and political messages?” Well, your prayers have been answered. I literally have nothing bad to say about this film. Chances are that you (like me) wrote this movie off as a filler children’s movie due to the PG-rating and campy trailer. However, this is the best Dreamworks picture since Shrek burst onto the scene (remember when there was only one Shrek? Simpler times…), and it possibly even outshines that classic.

Starting at the moment we hear the sardonic yet hopeful voice of Hiccup (voiced by Jay Baruchel) describing his gloomy cliff top Viking village, this movie is impossible to disengage from. For some reason, I had no problem with the concept that there was once a Norse village beset by vicious dragon attacks. The sheer joy that you feel (yes, you. I am not afraid to be universal in this) when Hiccup takes his first flight on Toothless the dragon is completely overwhelming.

Visually, the Viking world is simple but beautiful. For a depiction of a dreary, perpetually destroyed town, it is extremely stimulating to the imagination. Surrounded by forest terrain, towering columns of rock and a people that have lost patience with his clumsy ways, Hiccup manages to injure one of the dreaded dragons. The problem with this heroic deed is that no one happens to witness it, so he wanders off on his own to find the beast and bring back proof. Due to what his fierce father Stoick (voiced by Gerard Butler) would categorize as the failure of his Viking heritage, Hiccup finds himself unable to kill the dragon that he has brought down. From this point on, Hiccup begins to understand the dragons’ true nature. Everyone around him, including his feisty crush Astrid (voiced by America Ferrera), begins to notice the strange power that Hiccup seems to hold over the ferocious beasts. Conflict arises when they all begin to expect what secrets he is keeping, and he is faced with the choice between loyalty to his people and his belief in what he thinks is right.

Beyond the compelling story, visuals and characters, this film has a simple yet important message. Hiccup’s journey teaches the uncomplicated lesson of being open to new ideas. His interactions with the dragons and acceptance of a shift in his reality are what makes his such a special character. I have not been so starry-eyed about any other movie (except Up, which this film rivals very closely) in such a long time. Take a break from Texts From Last Night. Close your “History of Modern Germany” textbook. Go see this movie. How to Train Your Dragon is now playing at Hamilton Theater.