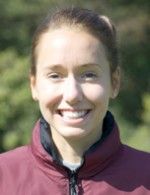 Why Elise? Elise tore up the track on a weekly basis this year, and in the process shattered several Colgate records. In addition to re-writing the record books, DeRoo was named Patriot League Female Runner of the Year and Patriot League

Scholar-Athlete of the Year in track.

This year, you brought home the Patriot League individual title in cross country as well as claiming three other individual titles. Is there anything in particular to which you can

“I think it all boils down to being dedicated to training. I increased my mileage considerably over the summer of 2009, which gave me a substantial training base upon which I could build over the course of the year. Had I not put in that mileage over the summer, I wouldn’t have been able to train at the level I did throughout cross country and track. Also, it goes without saying that the support and direction provided by my coach and team have been instrumental in helping me to become a better athlete.”

You were named Patriot League Scholar-Athlete of the year in track, as well as being named Female Runner of the Year in cross country. How did it feel to bring home such highly-touted honors?

“It was extremely gratifying to be recognized for the work I put in to both academics and athletics. Its fun to have won this award for Colgate – I’m proud to wear my Colgate singlet on the track and proud to be representing Colgate through the Patriot League Scholar-Athlete award.”

As a two-sport athlete, how are you able to balance you schoolwork and your athletic

commitments while performing at such a high level for both?

“Striking a balance between school and athletics hasn’t been easy for me. First semester was a big learning experience for me; juggling my new, more time consuming training schedule and a more rigorous academic schedule than ever before proved difficult. The way I’ve found balance between the two is by creating a schedule and sticking to it. I’ll allot a certain amount of time for my training, and a certain amount for my studying, and when that time is up I move on and give myself a little break. I realized this year that spreading yourself too thin over school and sports helps neither athletics nor academics, so I try to keep everything in perspective when I’m figuring out how I’m going to balance school and running..”

You’ve been tearing up the Colgate record books. Did you have your sight sets on breaking all these records, or has it been a product of a lot of hard work?

“Both. However, the effort I put in was not so much directed at breaking school records, but at achieving personal bests. If a personal best happened to be a school record, then that was what my sights were set on for that race.”

Throughout the track season you were able to improve considerably in a very short time period. Would you attribute that to running a particularly good race that day, or to other factors?

“I hope it wasn’t just a random good day! The early season track races we ran were in poor conditions (such as 90 degree heat in Puerto Rico), and its hard to hit fast times in those conditions. Once conditions improved (Princeton meet, 60 degrees) I was able to perform to the best of my ability.”

Do you have any techniques you use immediately before a race to best prepare yourself?

“Not particularly. I have a warm-up routine that I carry out religiously, but other than that I just try to stay calm mentally and get warmed up physically!”

Now that you have shown you can achieve a lot of success in the Patriot League, do you hope to continue your success on the ECAC level and contend for titles there?

“I hope to move beyond ECACs this season to compete in Regional’s in late May. That said, I also hope to do well at ECACs!”