In The Light: Becky Blake 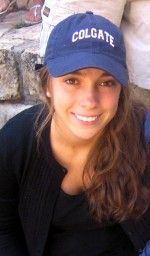 For Becky Blake, the last four years at Colgate have been about not “falling into a routine.” A well-placed “step outside of your comfort zone” can make the college experience. Blake learned this lesson with a few unexpected leaps outside of her old way of doing things.

As it turned out, a little nudge and push in the right direction from a friend can define a college experience. As a first-year at Colgate, Blake had two close friends who were involved in Masque & Triangle, a theater group. Blake herself held no aspirations of participating in theater, but events intervened. After one of the cast members of the Reefer Madness, the musical in production at the time, dropped out, the company asked Blake to fill her place. Blake would go on to do four musical productions with Masque & Triangle.

“It was the most fun I’ve had at Colgate,” Blake said of her time with Masque & Triangle.

The anthropology major and Jewish studies minor from Oradell, New Jersey has gotten involved on campus as the Vice President of Masque & Triangle, an active member of the Colgate Jewish Union (CJU) and student coordinator for the Phi Eta Sigma Honor Society. Together these activities comprise a profile of a student that Blake would never have anticipated using to describe herself.

Blake’s involvement in the CJU had its own serendipitous start.

“I never considered myself a religious person,” she said, “but I signed up anyway.”

Her participation in the group over the next four years drew out and reinforced a once ambivalent view of religion. A turning point for her took place during a Birth Right trip to Israel. The two-week trip was a moving experience.

Blake takes part in weekly Shabbat service and dinner. At each Shabbat, she helps cook various dinners that include chicken dishes, kugel and matzo balls. She helps organize major Jewish events on campus like the 24-hour reading of the names of Holocaust victims that takes place on Holocaust Remembrance Day.

Blake also has a strong commitment to the Phi Eta Sigma Honor Society. She has contributed to campus recognition efforts including the Professor of the Year Award.

Blake took opportunities where she found them and if she could offer any advice to others it would be to do the same.

“Some of the most interesting people I have met or things I have learned have been at lectures or events I spontaneously decided to go to,” Blake said. “Rather than watching Grey’s Anatomy re-runs, go out and see what’s going on around campus. You’d be surprised how many great things are going on.”