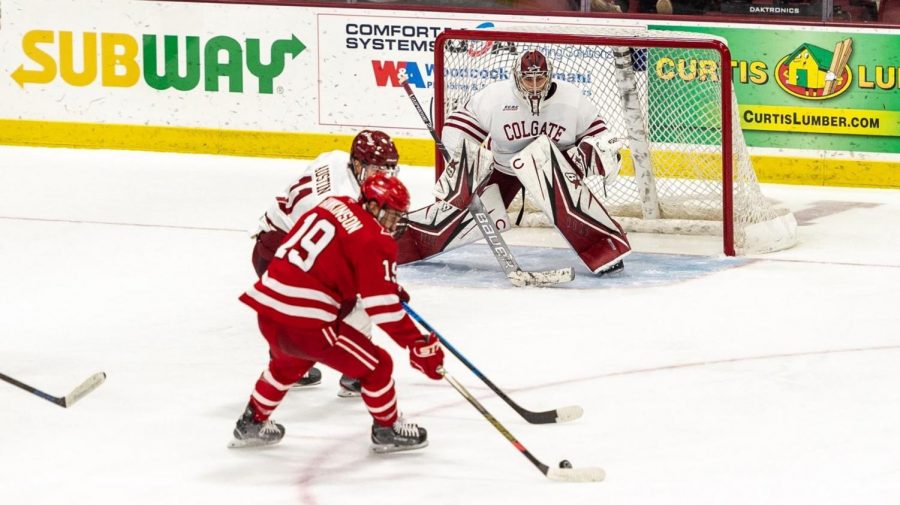 Colgate men’s hockey played their latest weekend series against University of Miami (Ohio) at the Class of 1965 Arena resulting in a tie and a loss. The Raiders faced off against the RedHawks on Friday, October 25 and Saturday, October 26.

Friday’s game displayed two teams that were extremely well matched. Colgate and Miami tied in faceoffs, each team winning 24 apiece. The Raiders came out strong in the first period, propelled by a phenomenal goal by junior forward Paul McAvoy. Seconds after the McAvoy goal though, the RedHawks answered and got themselves level on the scoreboard. Senior forward Ben Sharf battled his way to the goal and rocketed one past the RedHawk goalkeeper, giving the Raiders a 2-1 lead going into the second period.

Sophomore goalkeeper Mitch Benson stood strong in goal, stopping 25 of Miami’s 28 shots. Still, Miami managed to get another goal into the back of the net right before the end of regulation. This sent the two teams into overtime and made the final score 3-3.

The game was fast-paced and competitive, but some of the Raider’s shots in the third period could not find the back of the net.

While Friday was a fight to the final whistle, Colgate failed to get a hold of play in Saturday’s bout. Miami scored the first and only two goals of the game in the first period. Despite Colgate winning the faceoff battle 27-20 and outshooting Miami 29-19, the Raiders could not find the back of the net.

The second and third periods showed even match-ups between the two teams, despite the RedHawks controlling the first. The Raiders had multiple chances to score, but unfortunately could not find opportunities to capitalize on their shots. The RedHawks’ defense did a good job of fending off the Raiders’ offensive chances. Also, the RedHawks’ offense ruthlessly tried to get shots off in the second and third periods, forcing sophomore goalkeeper Mitch Benson to come up with huge saves for Colgate. Benson was not the only defender to come up big for the Raiders’ in Saturday’s game. Meyer also had an excellent performance. Once again, he led the Raiders in blocked shots by blocking three. However, these efforts were not enough as the Raiders fell 2-0.

Sadly, the weekend did not go how the Raiders would have liked it to go, but it did highlight some of the Raiders’ strengths. Colgate fought to the end of regulation in both games and was able to consistently register shots on goal throughout both games.

The Raiders will continue their non-conference schedule this coming Friday, November 1 against Providence in Rhode Island.