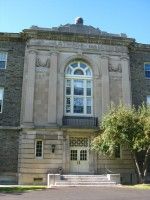 Last week, Colgate University announced that three buildings will be renovated within the next year. The announcement described that, in addition to the new fitness center that will be built, Lathrop Hall, Watson House and the Colgate Inn are all in need of maintenance and will be updated in the coming years.

Since the construction of the Robert H.N. Ho Science Center, Lathrop has steadily declined in use.

“It is the beginning of a very important renovation for Lathrop Hall, this project has been in the planning stages for a while,” Vice President of Finance and Administration David Hale said.

While there are no plans for floors one through three of Lathrop as of yet, the basement and the “link” between Lathrop and McGregory Hall will be renovated into a purposeful space. Colgate has apparently wanted to update Lathrop for years, but the recent economic downturn hindered the University’s ability to do so. Changes will include increased accessibility and improved air handling in the building. Various administrative offices that work closely with the Dean of the College and the Dean of the Faculty will move to the basement and the “link” in Lathrop because of its proximity to McGregory’s office space. Furthermore, Lathrop’s changes also feature expanded space for student rehearsal and the Colgate Speaking Union.

“The way capital projects like this should be developed is to work with the groups who will ultimately be using the space,” Hale said.

Renovations are already underway at Watson House, currently meant to be the official residence for the President of Colgate.

The approval of the renovation of Watson House by the Board of Trustees cleared the way for President Herbst and his family to live on campus. Meanwhile, newly acquired 35 Payne Street is zoned as a residential lot and Colgate is still considering what will be done with this property.

Finally, The Colgate Inn, although still lacking approval of the project by the Board of Trustees and the Hamilton Village Board, will likely undergo renovations this summer.

“The Colgate Inn is a challenging building,” Hale said.

There will be substantial renovations that will not only expand the building slightly, but also modernize the rooms. A few of these will also be expanded into suites. Additional changes include repositioning the kitchen, the Tap Room and the dining room within the building.

“We envision a patio and many more windows facing the intersection and Madison Street,” Hale said.

The renovations of Lathrop Hall, Watson House, the Colgate Inn and the Fitness Center will cost the University approximately $15 to $ 20 million. The new Fitness Center will hopefully be Colgate’s first Leadership in Energy and Environmental Design (LEED) certified building, according to Hale. LEED is an accreditation by the U.S. Green Building Council (USGBC) and maintains standards for the construction and operation of environmentally sustainable buildings.

“We’ve gone through a period of budget adjustment, and these projects have been undertaken without undue pressures on the current budget,” Hale said. “The cost of construction should be lower than what we experienced a couple of years ago.”

Hale claimed that Colgate is facing an opportune time to refinance some of Colgate’s tax-exempt debt because of current low interest rates. Additionally, Colgate’s ability to initiate renovation projects is aided by the University’s capital project reserves, as well as donations from alumni and other sources.

“We believe this an advantageous financing environment, and we’d like to capitalize on that,” Hale said.