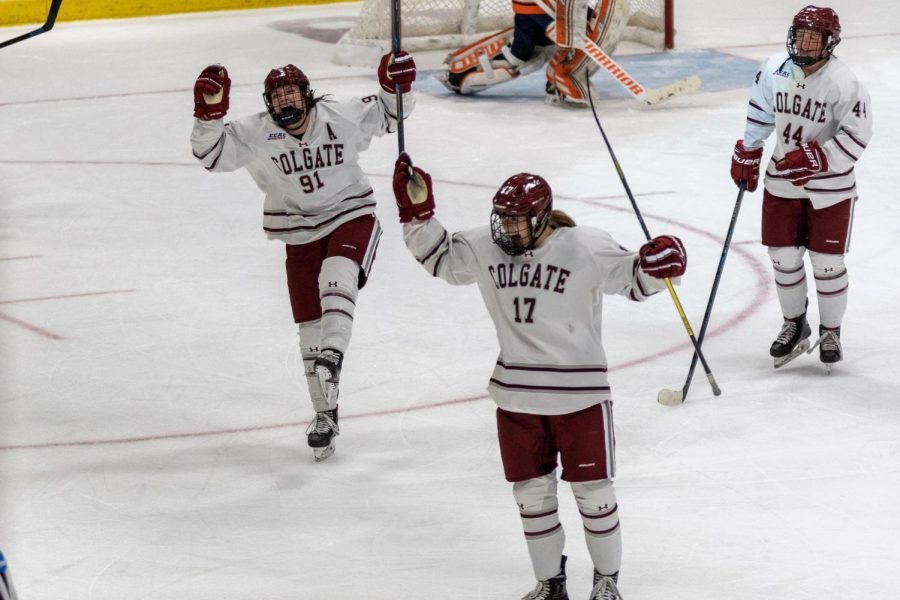 The Colgate Raiders have not lost to the Syracuse Orange since the 2014-15 season. That would be a surprising statement out of context, maybe for the basketball or football teams, but not for 2017-18 Division I National Coach of the Year Greg Fargo’s women’s hockey team.

The Raiders looked to extend their unbeaten streak against the Orange over this weekend’s home-and-home series.

After putting up ten goals in two games, the Raiders comfortably moved to 4-2-1 on the season and extended their unbeaten streak at the Class of 1965 Arena to 3-0-1.

Colgate hosted the first game of the weekend series on October 18.

First-year forward Sammy Smigliani opened the scoring for the Raiders 6:50 into the first period. Her goal, the first of her collegiate career, was assisted by junior forward Kendall Williamson.

Once the floodgates opened, Syracuse goaltender Ady Cohen struggled to tighten the crease and the scoring did not stop.

Sophomore forwards Noemi Neubauerova and Delani MacKay pushed the Colgate lead to 3-0 at the end of the first period, with the third goal coming on the power play.

Syracuse and Colgate battled in a scoreless second and nearly half of the third period was gone before first-year Maggie MacEachern’s first goal 9:45 into the third.

Senior Caroline Ross added the last Colgate goal of the evening to secure a 5-2 victory in the first leg. Senior goaltender Liz Auby tallied 31 saves in the win.

In the second contest, the teams traveled to Syracuse on October 19.

The game’s start mirrored the first and Colgate jumped out to an early commanding lead, scoring the first four goals of the game.

This time, though, Syracuse turned to their second net-minder, Allison Small, to take on the Raiders.

After junior Coralie Larose capitalized on a power play, Neubauerova extended her team lead in goals (four), points (seven) and plus-minus (plus five) by picking up a goal and an assist.

Her goal, the second of the game, turned out to be the game winner.

Next, the Raiders will travel to Buffalo, New York to take on the Connecticut Huskies for the first game of the Icebreaker Tournament on Friday, October 25.

The winner of that will face the winner of Mercyhurst and Minnesota-Duluth on Saturday, October 26. It will be yet another opportunity for the Raiders to see high-quality out-of-conference competition.

After that, the Raiders return to ECAC action. They will host the Princeton Tigers and the Quinnipiac Bobcats over Alumnae Weekend on November 1 and 2.