The Big Question: Why is the Amazon Burning? 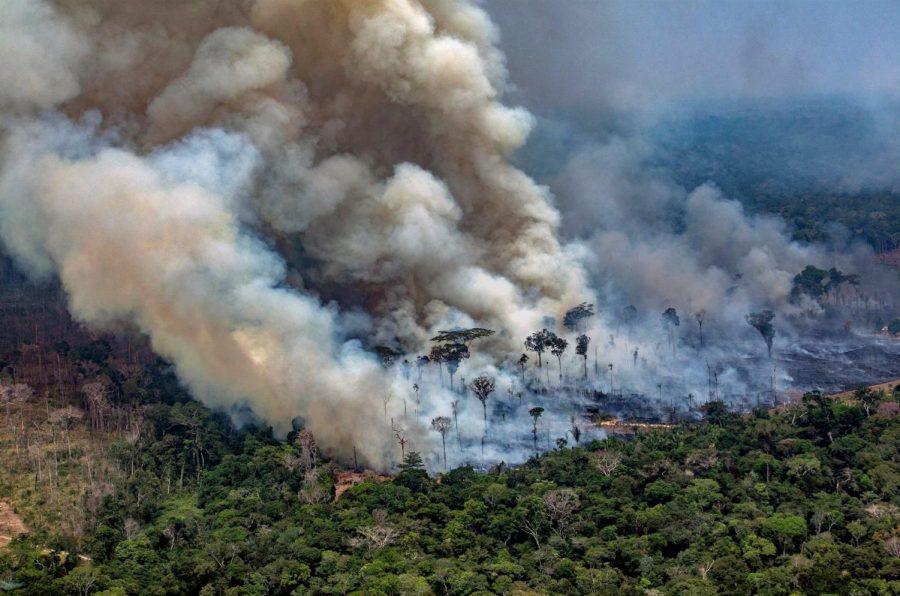 The first of four panels that are a part of the new “Big Question” series took place this past Wednesday, September 18. This series will be hosted by each of the four commons, and is aimed to address big questions relating to climate change. This lecture was hosted by Colegrove Commons in Ho 101. The moderator and creator of this series is Assistant Professor of Biology Ana Jimenez. The presenters were Associate Professor of Biology and Environmental Studies Catherine Cardelús, Associate Professor of History and Director of the Native American Studies Program Heather Roller and Assistant Professor of Geology and Peace and Conflict Studies Teo Ballve.

As an organizer, Jimenez explained that her intention was to deliver a global perspective as to what is actually happening in the world.

The lecture accomplished this goal by having faculty members from a diverse range of departments give their perspectives on the complexity of the question at hand: “Why is the Amazon burning?”

The first presenter was Professor Cardelus. She brought in her expertise in biology to explain the detrimental effect the fires in the Amazon have on the crucial ecological benefits provided by the forest. 60 to 90 percent of the planet’s biodiversity lies in the Amazon, a region that takes up only 6 percent of the planet’s land mass. This environment provides us with valuable resources like fresh water and carbon storage, but these are threatened by the positive feedback loop in which fires lead to a release of carbon and a decrease in rainfall throughout the rainforest. This dangerous cycle could eventually turn the Amazon into a savannah.

Cardelus also discussed how these fires originated. It is common practice in Brazil to use slash and burn techniques for agriculture, meaning farmers will cut down prize trees and burn the rest of a plot of forest in order to create a grassland for cattle. In this instance, an event called “Fire Day” was organized via WhatsApp and an enormous group of farmers participated in the slashing and burning of a massive portion of land that resulted in approximately 72,000 fires that spread across the Amazon.

Professor Roller followed with another side to this story, speaking on how these events are linked to the invasion of indigenous territories in Brazil.

Brazil has 250 indigenous groups—approximately 900,000 people in total. Brazil also has the largest number of uncontacted peoples in the world. Brazil’s president, Jair Bolsonaro, has been trying to rollback about 30 years of progressive laws protecting indigenous rights and has openly expressed nostalgia for the days of dictatorship in Brazil. On top of this, he is also attempting to make the Amazon a front for economic growth and has encouraged the predatory actions of the people who started Fire Day.

Roller went on to explain that the burning of endangered and indigenous lands is not a new phenomenon, but with the 2018 election, the previously covert war has turned into an open attempt to monetize this treasured land. Agencies in charge of protecting this land are being stifled, leading to a surge in native groups taking the protection of the Amazon into their own hands through forming brigades and patrolling borders. This is a very dangerous task, as Brazil is the leading country in the number of murders of environmental activists in the world.

On top of this, in 2018, an unprecedented amount of indigenous people ran for office so that they could be involved in the discussion about the Amazon. Indigenous peoples make up one of the largest resistance groups  in Brazil today.

Following Professor Roller, Professor Ballve provided a geographic perspective on the true extent to which the burning and abuse of the Amazon is a global threat.

“Geography allows us to see how seemingly unrelated things are deeply connected,’’ he said.

Ballve explained how capitalism has come to define our relationship to nature. Capitalism is quite literally bleeding the rainforest dry as farmers create grasslands for their cattle to graze, pushing back the border of the Amazon and destroying the precious resources it provides.

Brazil is also the world’s largest producer of beef, which is a larger problem in itself. As trees are burning and releasing carbon, the cattle are releasing huge amounts of methane into the atmosphere as well as depleting local resources the Amazon provides as they graze through it.

This problem does not seem to be ending, as the government realizes that areas where there isn’t investment, like the remaining portions of the rainforest, present spaces where an even larger profit can be turned than places that are already capitalized. This reveals a larger story about how capitalism controls the way humans interact with nature, and how problematic the way we source our food is.

Following these presentations from the panel was a question-and-answer session. Members guided the discussion to topics spanning modern day slavery to what we can do individually at Colgate to try and minimize the threat of climate change were covered.

“It’s hard to feel like you can make an impact when something as big as this is occurring,” Professor Cardelus said.

Individual efforts such as voting and participating in climate change conversations, though seemingly insignificant when taking on such a large problem, are vital in creating change. The climate strike, taking place globally and on Colgate’s campus, is a great start to getting involved. With Colgate’s campus seems so far removed from issues of climate change, it is still important to inspect the ways that individuals and the community at large can assist in a problem that needs all the help it can get.

This devastating burning of the lungs of the Earth is a wake-up call and requires substantial policy reform for the future.