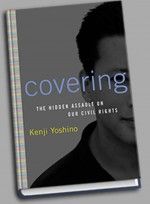 Keeping Martin Luther King’s proverbial dream alive is often a fleeting, one-day affair, but sometimes, we do indeed wake up and carry on the conversation. On Wednesday, February 24, Chief Justice Earl Warren Professor of Constitutional Law at New York University School of Law and human rights activist-author Kenji Yoshino visited Colgate to meet with students and faculty and discuss the current and future states of civil rights in the United States.

The evening began with a dinner attended by members of several student groups, including Brothers and LGBTQ. Students had the opportunity to discuss a wide range of issues with Yoshino.

Yoshino’s lecture served as a bookend to a month-long series of civil rights events that started in January on Martin Luther King, Jr. Day. Associate Professor of Mathematics and University Studies and Director of LGBTQ Studies Ken Valente welcomed the audience to the talk with recognition of the myriad student groups and University offices that supported the event. Visiting Professor of LGBTQ Studies Casey Brock ’86 then introduced Yoshino with a short autobiography, commenting that Yoshino’s landmark 2006 book Covering: The Hidden Assault on Our Civil Rights has been “hailed as a touchstone in the struggle for human dignity.”

Covering, winner of the 2007 Randy Shilts Award for Gay Non-Fiction, won critical acclaim for its dissection of contemporary civil rights issues. The title refers to Yoshino’s argument that the victims of social biases – racial, sexual, gender or otherwise – actively mute those characteristics that divulge their true identities, despite personal recognition of such identities. Yoshino came to use the term “covering” after discovering the work of Canadian sociologist Erving Goffman, who in 1963 noted, “It is a fact that persons who are ready to admit possession of a stigma (in many cases because it is known about or immediately apparent) may nonetheless make a great effort to keep the stigma from looming large… this process will be referred to as covering.”

Yoshino developed this idea further, defining four axes of covering – activism, appearance, association and affiliation. In his Colgate lecture, he called them, “dimensions along which we can highlight or downplay our identities.” The dynamics of these axes in contemporary society were the subject matter of the lecture.

Yoshino structured his lecture into what he called “three concentric circles,” a personal biography, a history of the LGBTQ rights movement and a “cautionary tale” about the pressures of assimilation.

His first circle summarized his own academic and coming out experiences that led him to both a career in law and his decision to write Covering. After attending schools in the United States, Japan and the United Kingdom, Yoshino slowly came to terms with his sexuality, despite social and professional pressures to pass as heterosexual or cover.

“I was being asked to tone down my identity to make it less threatening to others,” Yoshino said of his first law faculty position.

He called Covering “a work about the relationship between assimilation and discrimination” in civil discourse. The resolution to this tension, Yoshino argues, is the although overnight hosting is critical, the quality of programming that they had to offer did not meet their own and the visitors’ standards.