Hooking Up with Masque and Triangle 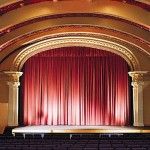 The production of a play generally involves weeks, even months, of preparation: the roles must be cast, the lines must be studied, the staging must be practiced and the final touches must be added. Plays demand effort from all the participants, but their work usually spans over a long period of time. The students who put on the One Night Stand on Friday, March 5 at the Creative Arts House, however, had only a few hours in one, short day to complete this entire process. The actors and directors had to quickly read through their scripts and then prepare for their performance that same night, but they all pulled through and created memorable and humorous skits.

This One Night Stand was the first of the semester, organized by Masque and Triangle, Colgate’s theater society that heads several drama productions each term, including the 24 Hour Burn and Cabaret performances. The actors and directors all volunteered to participate and the Stands are open for any students, even those with no prior experience in theater.

First-year Nadya Greenberg and senior Sara Zurmuhlen acted first in “So Tell Me About This Guy” as two women drinking, gossiping and discussing their love lives. Directed by sophomore Liz Malugen, the piece perfectly captured the spirit of gossip and of two friends seemingly speaking nonsense, but they understand each another completely.

“51 Smoke Scenes” followed, in which first-year Alex Heller and senior Megan Heise presented numerous short, rapid scenes that all tied together with the subject of smoke: they ranged from a stranger offering a cigarette to philosophical musings on smoke to famous celebrities smoking to worrying about smelling smoke. This act caused plenty of laughter as Heller and Heise, who had been directed by senior Anna Ataku, went from the mundane to the ridiculous and hurried to fit all the scenes into the time allotted for the acts.

One Night Stand’s third performance entitled, “The Wedding Story,” featured first-year Katie Avery, first-year Denny Gonzalez and junior Lauren Harries in a satirical version of a fairytale. Harries narrated a classic, happy bedtime story starring Avery and Gonzalez as the characters until they argue with her and require that the true version of their lives be told, resulting in a rather depressing and realistic, but amusing story.

The final performance, with actors senior Laura McDonald, senior Kevin Gillard, junior Kathleen Armenti and senior Sarah Tilley and senior director Max Counter, centered on an old woman who forces her younger relative to help her kidnap a man for her older friend. The costumes merely added to the entertainment value of this skit that was already filled with humor.

In one night, these Colgate students managed to go through the entire process of putting on plays and, in the end, they excelled. Drama and comedy were abound during all four pieces. All of the stress of casting roles, learning lines, organizing costumes, props and performing in front of an audience is compacted into a few hours, but all of these students faced this challenge exceptionally well. It’s hard enough to act in front of a crowd, but the One Night Stands are even more daunting with the limited amount of time. The event allows any students the opportunity to join in the creative arts, and allows all students who watched to enjoy the end results.