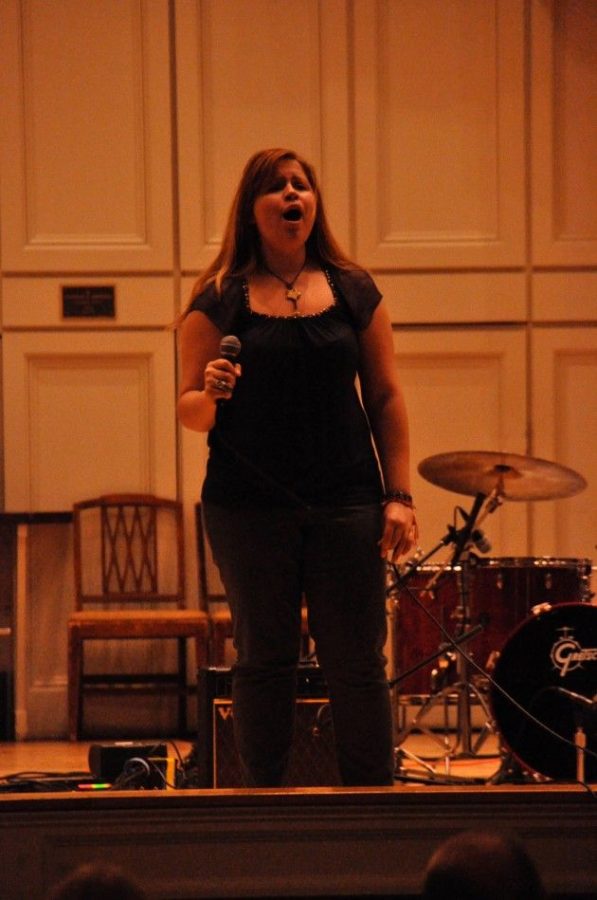 On Saturday, January 30, 18 days after the catastrophic magnitude 7.0 earthquake that devastated the Caribbean country of Haiti, numerous Colgate organizations joined together to host the “Hope for Haiti Concert” in the Memorial Chapel. From 6 p.m. to 9 p.m., over 40 acts hailing from Colgate, Hamilton and the surrounding area performed to a large and enthusiastic audience.

While contributions are still pouring in and all of the money donated via ‘Gate Card has yet to be tallied, Associate University Chaplain, Catholic Campus Minister and primary organizer of the concert Mark Shiner estimated that the event raised over $6,000 and sold more than six hundred tickets. The proceeds from the event will be evenly distributed between The American Red Cross, Doctors Without Borders and Partners in Health, organizations working directly in Haiti to bring relief.

“What we tried to do was give a reliable, trustworthy structure within which people could be generous. So, we didn’t choose any controversial charities. Everything has been extremely transparent,” Shiner said.

Besides Mark Shiner and a team of student volunteers, University Chaplain and Director of Jewish Life David Levy, Director of the Center for Outreach, Volunteerism, and Education (COVE) Ingrid Hale, Music Department Concert Manager Lorraine Joseph and Hamilton resident Pamme Swan all contributed to the rapid organization of this event.

Besides making the donation process accessible, the organizers of the concert wanted it to be an open, collaborative event in which Colgate students and Hamilton residents alike could come together for one common cause.

“You could really tell that the Colgate community and the Hamilton community worked closely together,” first-year Katie Rice said. “I really enjoyed the acts performed by the people from Hamilton.”

This collaboration was seen in the diversity of acts that performed at the concert. A group of students from Hamilton Central Elementary School kicked off the concert with their rendition of “Twinkle, Twinkle, Little Star” on the violin. Other elementary school children not only performed throughout the night but also sold Haitian flags at the door as part of their class project, which has already collected over $1,500 in donations.

Subsequent acts ranged from student bands and solo acts to a performance by Grammy award-winner and traditional Iroquois singer and guitarist Joanne Shenandoah.

Due to the enthusiastic response from almost all music and dance acts contacted by organizers, about 40 acts performed that night and were restricted to playing only one or two songs due to time constraints. As a result, there seemed to be something for everyone at the Hope for Haiti Concert.

“All these kinds of [large-scale concerts] are targeted at a particular kind of people, and this one was targeted at people of good will,” Shiner said.

Tommy Hoe, a staff member in the O’Connor Campus Center (Coop) mailroom and folk performer, lamented the context of the concert during his performance.

“It’s sad that a tragedy has to bring people together like this,” Hoe said.

The Colgate Hope for Haiti Concert was in some ways a smaller version of the concert of the same name and purpose broadcasted eight days earlier from New York City, London and Los Angeles, which was hosted by George Clooney and featured over 40 performers including Bono, Jay-Z and Justin Timberlake.

“Music is something that helps bring people together, so why not at Colgate?” first-year and student organizer of the concert Sydney Lowe said.

Although the atmosphere in the Chapel was hopeful and upbeat, between every few acts an emcee would take the stage and read off tragic facts pertaining to the current situation on the ground, in an attempt to keep the message of the concert in attendees’ minds.

The earthquake affected at least three million Haitians and has taken the lives of at least 170,000. Despite the subsequent outpouring of support for Haiti, including in a small way Colgate’s benefit concert, the country is still largely in disarray, and it will take a significant amount of time before it is able to fully recover.