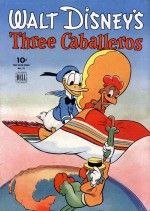 So began Professor Andrew Rotter’s introduction of Saludos Amigos and The Three Caballeros, the latest films in the Friday Night Film Series. Ted Roosevelt sent in troops to Latin America regularly and pretty much bullied the entire region into falling in line with him. This, Kotter explained, made the Latin Americans disgruntled. When FDR came into power, he decided to stop interfering forcefully, instead adopting a new policy which Rotter calls “Cultural Imperialism.”

And out of this cultural offensive stemmed Saludos Amigos and The Three Caballeros.

The film is made up of four segments, each of which has a Disney character finding itself in Latin America completely unaware of the local culture. As it turns out, each of the Disney characters slowly adapts while the plotline meanders through many comic turns. Donald Duck, Goofy and Jose Carioca make an appearance in this movie that seems to stereotype Latin America to some extent.

The Three Caballeros is a series of vignettes, each exploring a different part of Latin America’s culture. These vignettes are tied together by a common thread in that they are all gifts given to Donald Duck by his friends in Latin America.

The basic plot is a superficial examination of a couple of Disney movies. You would think that that was enough. It’s just a Disney movie, right? But just for argument’s sake, let’s delve a little deeper.

“I had seen these movies when I was younger, but hadn’t noticed then either how troubling some of their politics are, or how sophisticated they are in terms of film language and references,” Postdoctoral Fellow of the Film and Media Studies department Professor Alice Lovejoy said. “So on the one hand, the politics are something you leave with, while on the other hand, you leave with a sense that – at least at this point – Disney was much more experimental than we typically think.”

As some research on the internet shows, when Saludos Amigos was released, Latin America seemed a little too friendly to Nazi Germany. This was an attempt by the U.S. to mollify Latin American sentiment. Clearly the politics are something you leave with.

Now, one would normally dismiss Disney in the face of Federico Fellini or Jean Cocteau as an experimental film experience, yet the surrealism in The Three Caballeros borrows from Cocteau and as Lovejoy says, from Berkeley.

This challenges how we view these films. Lovejoy says that this brings forward a few questions –first, how we conceive of animation (an art for children or adults?) and second, how and why the state gets involved in producing these movies.