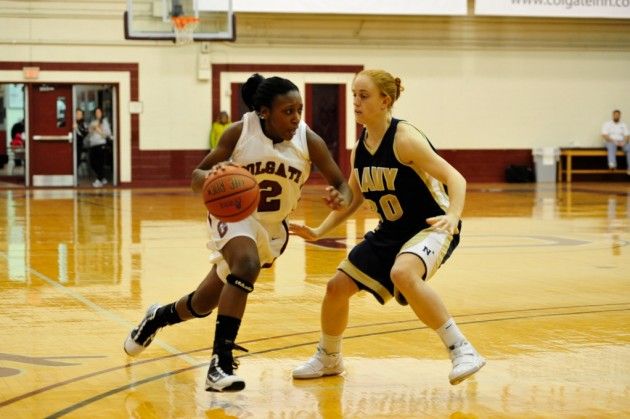 The action began with a Navy three-pointer by star forward Kristin Bowen. This early three by the opposition set the tempo for the game. Katie Garman began her impressive play early, hitting a short-range jumper and then forcing a turnover at the other end of the court. Garman’s two free throws helped to put the Raiders up 4-3 early in the competition.

“Katie plays hard on both ends of the court. Katie is moving well defensively and is really playing within herself offensively,” Head Coach Pam Bass said of Garman’s play. “Her senior leadership and confidence was evident throughout the game.”

Every possession of the first half proved to be a battle for the Raiders. First-year point guard Jhazmine Lynch and junior Taylor Wejnert helped Colgate gain their largest lead of the half by making successive jump shots, and the score grew to 19-11 with six minutes of play left in the first session.

This lead was short-lived, however. Navy’s Kristin Bowen made a quick three pointer to cut the lead to four. Bowen would prove to be Colgate’s biggest defensive obstacle, as she went on to score 14 points in the first half alone. With her help, the Mids were able to go into half time holding a 27-23 lead over the Raiders.

The start of the second half was slow for Colgate. At the outset of the half, Navy went on an offensive tear, going on a 7-3 run that put the Raiders down by eight. Sophomore Tricia Oakes led Colgate’s comeback, however, as she scored six points in two minutes. With another basket added by classmate Kelly Korkowski, the women were able to draw back within two points, 36-34.

Garman’s hot night from the floor continued, as she hit a three to give Colgate a 42-39 advantage. Wejnert took control of the floor a few minutes later, and was able to make a three-point play. After sinking the foul shot, Colgate was up by seven points with six minutes left to play in the game.

From this point onward, play was decidedly back and forth, with as many as seven tie scores amassing. With time winding down on the game clock, Bowen connected on another three and gave the Mids a 54-52 lead.

Korkowski led the final drive. She was able to put in an easy lay-up to tie the score up at 54. Hard nose defense is what proved to be the Raiders’ biggest ally for the remainder of the game. Korkowski made a key block on the other end of the floor when Bowen attempted yet another three. After Colgate received possession of the ball, Bowen fouled and with 38 seconds remaining, the Raiders called a time out.

“We told the team all day that we were going to win and that we just need to go out and do it. The huddle was actually very matter of fact. Jhazmine wanted the ball and we were able to get her isolated one-on-one to get to the basket on the first option,” Bass said. “Everyone on the floor did a great job of running their cuts and drawing their defenses to allow that to happen.”

The excitement in the air after the time out was almost palpable. Lynch gained possession of the ball and was able to snake through nearly the entire Navy defense en route to making what would prove to be the game-winning layup. Garman’s forced turnover on defense would seal the victory for the Raiders, with a final score of 56-54.

The women’s defense was the crucial reason for success in this game. The women were able to shoot 40% from the field, while holding their opponent to only 30% shooting success.

“It starts inside. Both Lulu Brase and Holly Havenstein did a tremendous job playing physical defense and not allowing Navy’s inside game to get good looks. Then, our guards did a great job balancing ball pressure and playing the drive,” Coach Bass said. “We moved on the pass and got into passing lanes and helped well. Kelly Korkowski stepped up deterring the three point shot with her long arm span.”

The Raiders’ next game will take place on Saturday, February 6 against Army on Cotterell Court.