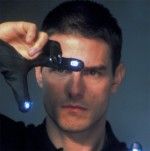 I am Puerto Rican – well, I am half Puerto Rican. My mom is 100 percent Puerto Rican … from New York; she’s Nuyorican. Her parents are from the island; they only speak Spanish. My mom speaks Spanish with a liberal sprinkling of English and me? I speak English.

As a card-carrying member of many different ethnic, cultural and religious tribes I often find my identity a bit muddled. What exactly makes me Jewish? I am not religious and I don’t speak Hebrew. I suppose I’m Jewish by way of a long clumsy last name or because of the way my hair reacts to humid weather.

What then makes me Puerto Rican, when I can fall into the categories of Caucasian or Hispanic descent? In understanding my identity, my Hispanic roots can get confused primarily because I don’t speak Spanish fluently.

I’m not sure if this truly is a Minority Report because I think there are a lot of students on campus who can identify with this middle culture. We’re caught somewhere between the proud fluency of our grandparents and the utility of language of our mothers

Senior Manny Torres’s father was born and raised in Lares, Puerto Rico and his mother, like so many Puerto Ricans, was born in the Bronx to Puerto Rican parents. I asked Manny if he felt that speaking the language was an essential part of Hispanic culture and he wholeheartedly agreed. Sophomore Jen Ortega, daughter of first generation American parents from Cuba, also agrees and laments, “My sister and I are the only ones in my family who can’t speak Spanish fluently (or at all for that matter) … I’ve never had a conversation with my maternal grandparents.”

Driven by the same desire, mildly ashamed to admit my mother’s last name (Santiago), I have always felt as though something was missing, as though I needed validation of hispanic-ness through the language. And so, when I came to Colgate I vowed to study Spanish.

My freshmen year I studied with Profesora Barrera, who to this day stops to chat with me. Patient and passionate, profesora really got me excited about the language; if not for her introduction I might not have continued on.

I have taken seven Spanish courses here, and after studying the language for four years I’ve found that there really is more to language than simple conjugation

Although I know Spanish (spoken slowly, of course) I may never be accepted as a native speaker. But that no longer preoccupies me. And to be honest, after studying throughout my college career, I do not feel any more or less a “part” of the

I have acquired a skill, not a culture. Culture lies between the words and was something that I knew well before I came to college. “Aye que linda,” my aunt would say as she braided my hair while I ate my rice and gandules. Hansel y Gretel on my grandmother’s lap on the beach at Isla Verde. I hadn’t missed a word of this.

There is no shame in not being able to speak like a native. Those who love the culture and the people who live it will never be tongue-tied. The good news for those of us who are two, three or more generations away from the mother ship/tongue is that you are NOT what you speak. Instead, the litmus test is family. Who do you love, not how do you say it.

It is nice, though, to be able to share my passion for poetry with my grandfather who gasps and pauses when I tell him I’ve read Machado, Neruda, Paz and Sor Juana Ines de la Cruz. And it’s fun to grin at a joke that may have previously flown by. There is room to grow – the smiling exhale of my grandfather as I stumble “sueñas con los angelitos” every Sunday before he hangs up a million miles away.