In the Light: Kaitlin Tufts 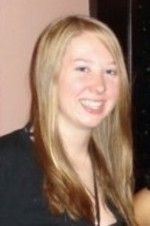 If senior Kaitlin Tufts is watching a movie, it is probably one her friends picked out. If she is listening to music, it might be a song her older brother Jeff, a 2008 graduate of Colgate, turned on in the car. Tufts, who is very difficult to annoy unless of course you walk very slowly in front of her, is the friend you would throw a surprise birthday party for in September of freshmen year and the sister you would convince to come to your college.

Tufts, a sister of Delta Delta Delta, is vice president of the sorority’s chapter development. Although Tufts admitted to being nervous about living in a house full of young women, she is in her second year of residence at the Tri Delta house and now smiles when she talks about her sisters yelling to one another in the hallway, doing homework together in the living room and eating dinner at the house Monday through Thursday.

That is not to say that her social network stops at the Tri Delta house. Tufts is particularly fond of hanging out on her friends’ couch in Newell and has studied abroad in both Trinidad and Australia. On Saturday, Tufts gets lunch at the Barge with her sidekick, Lin Henke, daughter of Associate Professor of Sociology Carolyn Hsu and Assistant Professor of Sociology Chris Henke. That is, if Lin is free.

Tufts is also a member of Konosioni and works at the Chenango Nursery School as an assistant classroom teacher.

Where will Tufts be in one year from now? Maybe somewhere in the Caribbean or South America working with the Peace Corps. Tufts is a peace and conflict studies major with a lot of traveling to do. She would like to work with child soldiers after earning a master’s degree in social work, but would prefer field work in Uganda or Columbia to administrative work in the United States.

When Tufts first told her mom that she wanted to travel extensively doing social work instead of becoming a nursery school teacher, her mom was a little shocked.

“She wanted to know what I would do when I was married and had children,” Tufts said.

Tufts doesn’t seem stressed, though. Besides, in ten years she could be ready to grow somewhat more permanent roots back in the United States, working with imprisoned youth. For now, she is here in Hamilton, finishing up her Colgate career and making the most of it,