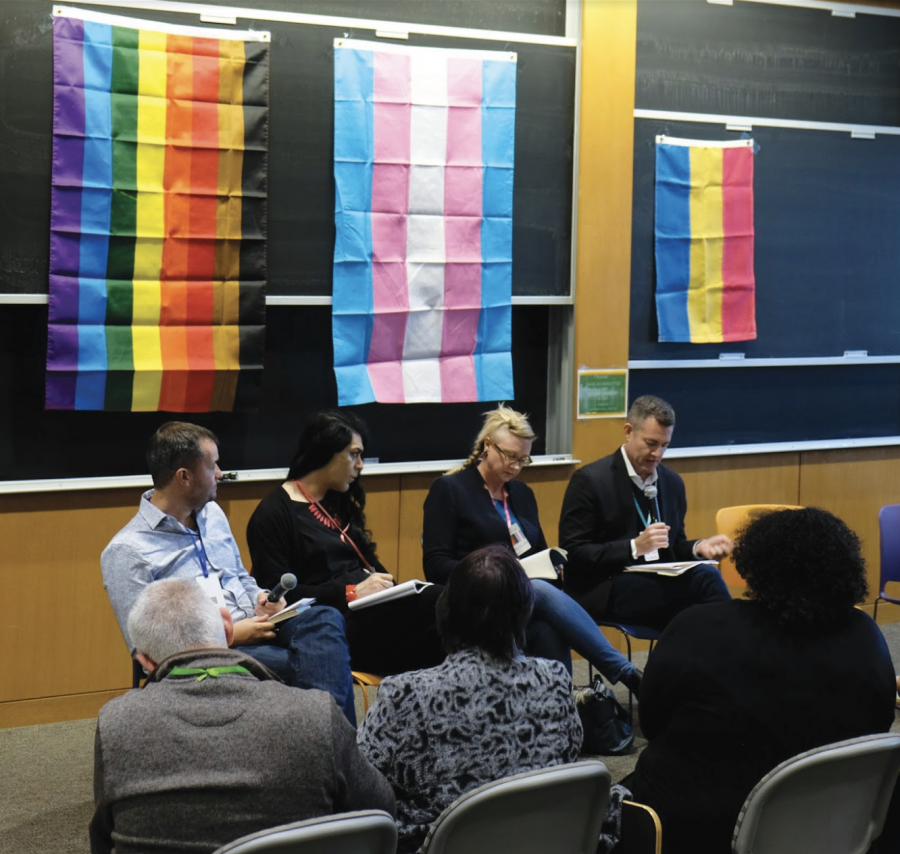 Brim introduced the idea of financial disparity between private and state-funded higher-education institutions exacerbating differences within the pedagogy of queer studies.

“Queer studies must be implicated in the mission of class and race sorting for it has indelible, field-defining, field-sustaining, ongoing, futuristic and material associations with the  most elite universities and colleges in the U.S.,” Brim said. “With notable exceptions, the field of queer studies has been and is still defined by and propelled by the immense resources of precisely those institutions of higher-education that most steadfastly refuse to serve representative numbers of poor students, of poor students of color, and the higher faculty without high-status and high-prestige degrees.”

Colgate Symposium Coordinator and Professor of Mathematics and LGBTQ+ Studies Ken Valente noted an observation made by White, one of the aforementioned panel members.

“[White observed that] establishing an association that provides for greater professional networking among faculty who teach LGBTQ Studies may help to address the disparities that Brim identified,” Valente said. “Both contributions underscored a question raised by DiPietro earlier in the discussion regarding the visibility of LGBTQ studies: Are we being as critical about the discipline and the  dynamics of inclusion and power it considers, as we need to be?”

Brooklyn College, CUNY Interim Associate Dean of the School of Education & Professor of the School Counseling Graduate Program María R. Scharrón-del Río followed the panel as Keynote Speaker. Scharrón-del Río discussed topics such as home and community, intersectionality, identifying labels and language, as well as their own professional and personal experiences as a queer Puerto Rican.

The symposium closed with an alumni and community panel “Fostering New Engagements with Queer Alumni and Communities.” Panelists Drea Finley ’13, Founder of SAGA Kids Sara Muñoz, Em Rubey ’18, Jack Skelton ’05 and Colgate Director of LGBTQ+ Initiatives Tiffany Lane discussed doing “good” vs. doing “right,” living “authentically,” the queer population of Hamilton and the Madison County area, as well as the support and systems in place or missing from the rural areas surrounding Colgate.

Valente spoke of discussions on the prospect of an LGBTQ+ center on campus. Valente said the center may fit into the future of LGBTQ+ Studies and its community at Colgate and beyond.

“Interestingly, the idea of a center goes back to the time when we first starting thinking of proposing the program. We never really revisited [the center], but now I’m hearing something about a space that the university may be able to help in creating but is more than perhaps ours,” Valente said.

“What I’m hearing is that maybe we should start to revisit the notion of a centre, but not in the way that we were talking about it 15 years ago; [rather], in a different way that benefits the community that might be based ‘down the hill’ rather than on the hill. That to me now becomes an interesting possibility for the future.”

Senior Rosie Coyle, who volunteered at the LGBTQ+ Studies symposium, said they feel positively about their experience.

“I was really excited for the opportunity to give back to a program that had helped my education in this way. Even though I never had any classes with the department, I believe its role on campus is unbelievably important. It’s necessary to incorporate LGBTQ+ studies into the activities of other departments to ensure that all students have the opportunity to experience the intersectionality I was able to,” Coyle said. “This weekend I was able to hear several amazing panel discussions about where the department and LGBTQ+ life at Colgate and beyond stand, where they have grown from, and where they could go. I think I am one among many excited to see what the next 10 years will look like!”