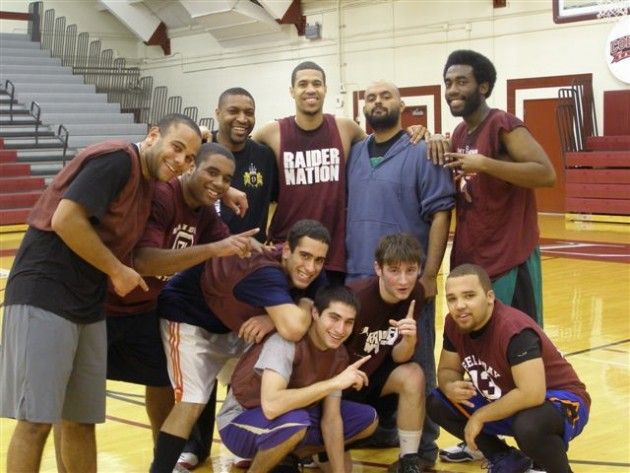 In the 1996 action thriller documentary, Space Jam, Michael Jordan and the Looney Tunes defeat a team of aliens with NBA skills called the Monstars in a game that ultimately decided the fate of Jordan and the Looney Tunes. If Jordan and the rest of the Toon Squad lost, they had to fly into outer space and work as entertainers on Moron Mountain. Win, and they didn’t have to go. Kind of a shady deal, if I do say so myself. The Monstars were a fantastic team, composed of now enormous aliens that stole the NBA powers of Charles Barkley, Patrick Ewing, Shawn Bradley, Larry Johnson and Muggsy Bogues. They were a hell of a team. However, Jordan made a layup in the last second to win a one-point game, sending everyone home happy.

What does this have to do with the Division I Intramural Basketball Finals? Funny enough, there are numerous similarities. First, the Sour Diesel Experience team was much like the Monstars, a supremely athletic group of varsity men’s soccer players that dominated play throughout the entire season. SDE went 5-0, but actually had two tough playoff games, defeating Phi Tau A 43-41 and Sigma Chi A 37-36 to get into the finals.

The Brothers A squad resembled Michael Jordan and the Toon Squad, with sophomore and Division I MVP Justin Young playing the part of His Airness. Young consistently dropped 20-30 points per game throughout the season, leading his team to a 4-1 finish in League A, good enough for a second seed in the playoffs. Brothers A’s one loss was to Sour Diesel Experience, though, as the soccer players crushed in that regular season matchup.

Not to be denied a rematch with the one seed in the playoffs, Brothers A defeated No. 7 Stroke City 75-50 and No. 3 Heavyweights 61-42 to earn a spot in the championship. The finals, which took place last Wednesday, February 10 on Cotterell Court, was a physical and heated affair. Brothers A led by one late when a Sour Diesel player made two free throws to put his team up one with 10 seconds left. The last moments were crazy, with players going all-out on the last possession. In the last second, senior Chuck Green hit a layup after a pass from classmate Manny Torres as time expired to win the game for Brothers A, 53-52, avenging last year’s finals defeat.

Continuing with the spots cinematic theme, the Division II playoffs were more like Rocky III, with a little twist. To refresh everyone’s memory of that American classic, Rocky is the reigning champ at the beginning of the film, but he loses a devastating bout to Mr. T. Rocky then trains on the beach with Apollo Creed before getting another rematch with Mr. T and winning the championship belt back. At the end of the movie, Rocky and Apollo Creed have one last sparring bout, a rematch of their own after Rocky II.

Anyways, No. 1 Phi Delt, playing the part of Heavyweight Champion Rocky in the beginning of the film, went undefeated throughout the regular season at 4-0 and strolled into the semifinals after an easy win over the Cougars. However, the No. 4 Bulldozers shocked Phi Delt 42-36, the former team being Mr. T. At the end of the day, it was No. 2 Sesame Street, who was none other than re-trained Rocky, that defeated the Bulldozers 47-42 in the finals.

But the Division II league could not end without some drama. Sesame Street used an illegal player in the semifinals in a 55-35 win over Brothers B, so a rematch of that game had to be played. With Brothers B (Apollo Creed) hungry for a rematch with Sesame Street, they came just one point short, losing 42-41.

With basketball season now over, the highly contested Troy Somero All-Intramurals Cup is up for grabs between Sigma Chi and the Cabezas. Sigma Chi won the football league, but fell short in the semifinals in hockey and basketball and the quarterfinals in soccer. The Cabezas meanwhile won soccer but lost in the finals in hockey, semifinals in football and the quarterfinals in basketball. Which one of these teams will reign supreme like Somero and the Diabetings did in 2005-06? It will certainly come down to the softball season to see who wins, or comes closest to winning, the Brien Puff Memorial Softball Championship Trophy.

The hockey recap will be next week, with the dodgeball article coming the following week.