Women’s Hockey Falls to Yale; Rebounds with Win over Brown 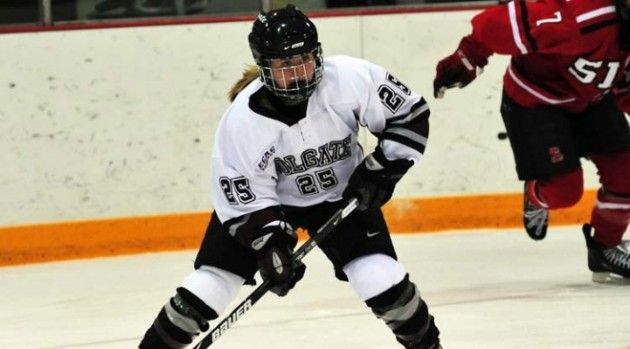 The Colgate women’s hockey team entered last weekend just a point behind Yale and Dartmouth in a three-way battle for the final playoff spot in the ECAC. On Friday the team played a crucial game against Yale, and despite outshooting the Bulldogs 40-26, Colgate suffered a tough 3-1 defeat. The Raiders, however, still exited the weekend just one point back of the final playoff spot due to some help from other teams in the league and a great performance by senior forward Katie Stewart. She was key in Colgate’s 4-3 over Brown on Saturday, scoring all four goals for the Raiders. The win means that the Raiders enter their final two games of the regular season, contests against Union and RPI at Starr Rink this weekend, with a very realistic shot at qualifying for the ECAC postseason.

Friday night in New Haven, Yale jumped out to the early lead as Caroline Murphy scored the opening goal 9:24 into the game off assists from Danielle Moncion and Samantha MacLean. Before the period was out though, Colgate would knot things up on the power play with 6:24 left in the period, as senior forward Evan Minnick scored off assists from junior forward Hannah Milan and first-year forward Jenna Klynstra. The Raiders dominated the first period in terms of shots, outshooting the Bulldogs 15-5, but unfortunately for them it did not translate into a lead on the scoreboard.

Yale took back the lead for good 6:51 into the second as Samantha MacLean picked up her second point of the night, this time scoring a goal off an assist from Becky Mantell. Despite numerous chances Colgate was unable to solve Yale goalie Jackee Snikeris and tie things up. Yale would put the game away for good with three seconds left in the third as Aleca Hughes scored on an empty net to put Yale up 3-1, a score that held up until the final horn.

The win temporarily put Yale three points up on Colgate for the final playoff spot in the conference. It was the Raiders’ second loss to Yale this year. In their first meeting, Colgate outshot Yale 43-17, but lost 3-0. On Friday Colgate outshot Yale again, this time by a count of 40-26. Amazingly, Colgate mustered 83 shots in its two losses to Yale, but scored only one goal. Yale goalie Jackee Snikeris played spectacularly against the Raiders, and salvaged both games for the Bulldogs. On Friday Colgate junior goalie Lisa Plenderleith was not to shabby either, stopping 23 of the 25 shots she faced.

The defeat at the hands of Yale meant that Colgate could not afford a loss to Brown, who was winless in league play going into Saturday’s game in Providence. The Bears gave the Raiders all they could handle, however. Brown looked desperate to get a win in its last home game of the year, and the Bears scored twice in the first period. Alena Polenska scored 9:57 into the period off an assist from Laurie Jolin, and a little over a minute later Sasha Van Muyen scored off an assist from Nicole Brown.

Colgate though would get things going early in the second as Katie Stewart scored off an assist from senior forward Beth Rotenberg. Halfway through the second Brown would get its two-goal lead back as Jenna Dancewicz scored on the power play with assists going to Laurie Jolin and Alena Polenska. However, before the period was out Katie Stewart would put the Raiders on her back. She scored two goals, both unassisted, to tie things up. The second goal came on the power play.

With the score tied at three in the third Stewart again came up huge. Lisa Plenderleith passed the puck up to senior defenseman Ali Edell. Edell then got the puck to Stewart who was near center ice. She took the puck herself all the way to the Brown net. She wrapped around behind the net and shot the puck past Brown goalie Katie Jamieson to put the Raiders up one with 17:10 left in the third. Colgate was able to stymie Brown’s attack the rest of the way and hold on to the crucial 4-3 win.

Lisa Plenderleith was in net again, stopping 30 shots, while her counterpart for Brown, Katie Jamieson, made 33 stops. The star of the game, however, was Katie Stewart who had a hat trick plus one, a feat that earned her the ECAC Player of the Week Award. Her four-goal performance was the first by a Colgate player since 2006.

“It is do or die for us now,” Stewart said. “I just tried to do whatever I could to help the team.”

The win improved Colgate’s record to 10-18-4, 6-10-4 in league play. Luckily for the Raiders, both Yale and Dartmouth lost on Saturday so Colgate enters the final weekend of the regular season just one point back of the final playoff spot. If Colgate wins both games this weekend, there is a very good chance of making the playoffs, as Dartmouth and Yale both have a pair of difficult games to end the season. Colgate will host a Union team at 7 p.m. on Friday that is tied with Brown for last place in the conference. Things get tougher on Saturday as Colgate closes out the regular season against RPI, a team that beat Colgate 10-4 earlier in the year and is currently in fourth in the ECAC. That lopsided score is certainly on the mind of Katie Stewart going into this weekend’s slate of games.

“We are going to have to play 120 minutes of great hockey, start off strong and not give either team the slightest edge,” Stewart said. “We did not play up to our potential last time against RPI so we have a score to settle.”

The Raiders will have more than revenge on their minds though as beating RPI will likely be the difference between making and missing the playoffs for the Raiders.