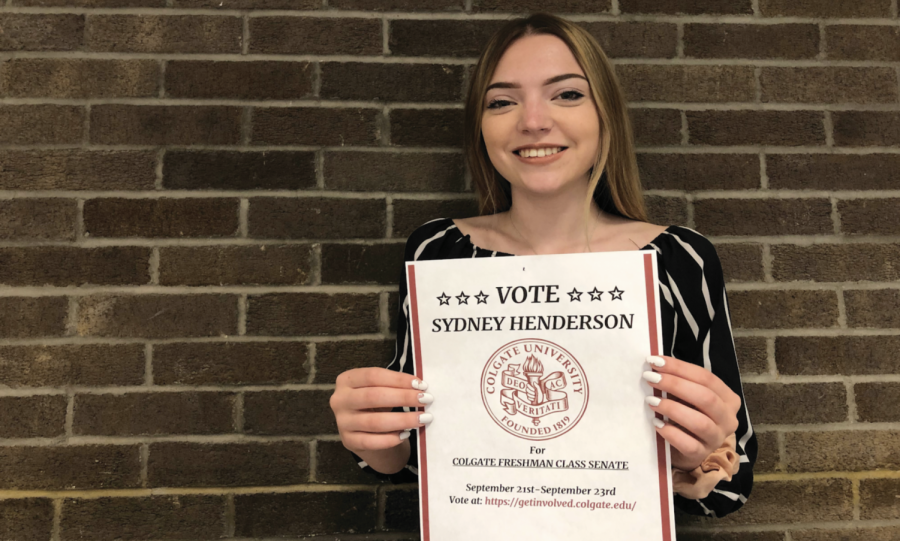 In a joint statement from Bundy, Johns, Citron and Elarabi, for the first time, first-years ran for the Senate corresponding to the Commons they currently live in. The ten seats for the class of 2023 distribute the class representatives proportionally by the number of first-years living in each of the four Commons: Brown, Chiccone, Dart-Colegrove and Hancock. An additonal, general seat was given to the student with the highest percentage of votes in the Commons that did not win a seat.

“We made this choice to support Colgate’s mission to build community through the Commons System. Elections by a Commons basis allows senators to best represent the needs of their respective constituencies, which begins in the commons,” Bundy, Johns, Citron and Elarabi said.

First-year senator Serelle Carr ran for senate representing Hancock Commons, and she attended her first Senate meeting September 24 after being elected to the body. Carr said she feels the new election system allows first-year students to make more thoughtful and informed choices about who they choose to represent them.

“I think that having the opportunity to run for a specific Commons was a great idea because it gave candidates the opportunity to be elected by people they likely know better and it gave voters the chance to vote, with confidence, for someone they actually know,” Carr said. “The Commons System broke up the vote effectively so voters knew the candidates and actually took the time to read and consider ballot statements.”

The constitution also restructures the process of assigning SGA representatives to governance boards. Now, senators will serve on these boards as part of their responsibilities instead of opening applications to the entire student body.

“We made this change in hopes of increasing Senate efficacy through concrete action steps. This begins with governance boards,” Bundy, Johns, Citron and Elarabi said in a joint statement.

“I believe that new constitutional revisions, like the placement of Senators on Faculty Governance Boards and the removal of waiting periods for Constitutional amendments, will allow the senators and members of SGA to pursue their goals much more efficiently and with greater cooperation with Colgate’s faculty and administration,” Brown said.

“Candidates for president and vice president will now occur on a single ticket basis. This eliminates the campaign team structure, which creates competition and strife within the Colgate community,” Bundy, Johns, Citron and Elarabi said. “We hope these changes will create a more equitable election process.”

SGA Senate meets Tuesdays at 7:00 p.m. in Persson Hall Auditorium. Meetings are open to all members of the Colgate community and are broadcast live online.