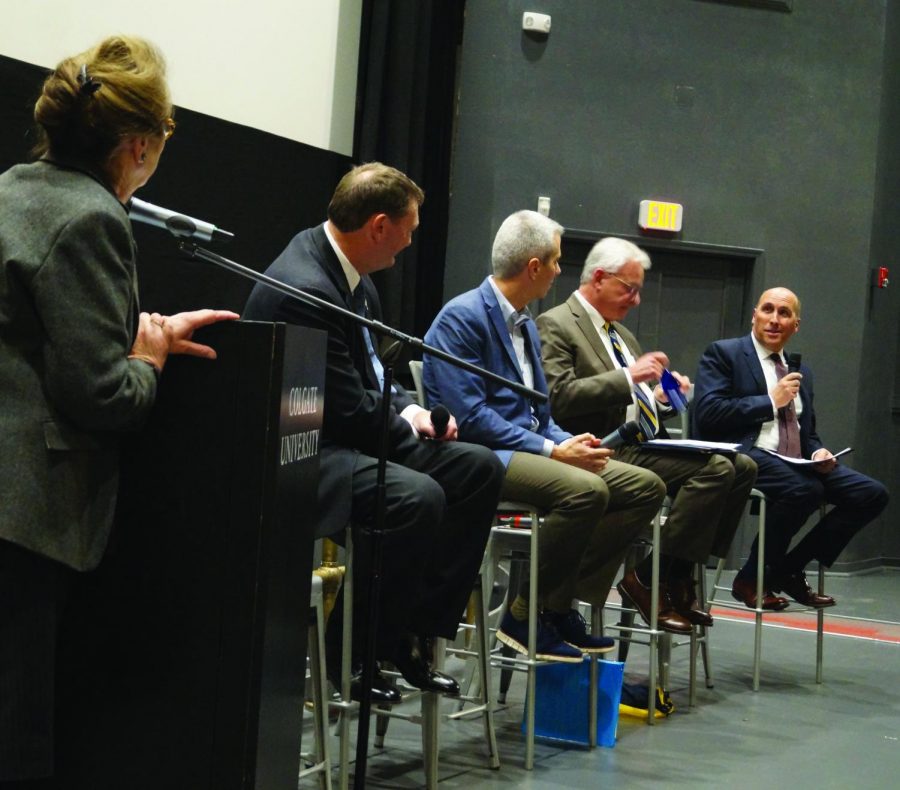 Round Table for College Presidents

The panelists discussed the history of the 22nd Congressional District, specifically within Seneca Falls, and its relation to many public, private and community colleges. The event centered around the question: How does each president’s respective school fit into the regional economy today within New York State and the United States in general? The discussion addressed the important role that these schools play as employers, as well as the difficulties that they face in terms of keeping students in the area post-graduation.

Senior Glynnis Harvey asked how each panelist reckons with the fact that they exist on stolen land and how they plan to work with existing native nations. In response, Brindisi, Chesbrough, Rogers and Casey conversed about their social responsibilities. Brindisi called attention to the affect on climate change on native lands and his commitment to protect it. Rogers and Chesbrough talked about celebrating diversity through outreach and scholarships. Casey said Colgate does not do enough and is disappointed that Colgate only recently hired a history professor who specializes in Native American Studies.

Harvey said she was pleased with the presidents’ responses to her question.

“I was ecstatic to hear Congressman Brindisi address how climate change affects Native American communities and his commitment to bringing that issue to Washington,” Harvey said.

“I do think there was strength in President Casey’s admittance that there is more Colgate could be doing to come to terms with our history. This issue, of course, existed long before Casey’s tenure but I do believe in his promise to make Colgate a better place in all regards heading into our third century.”

Congressman Brindisi provided closing remarks to conclude the event. He argued that the institutions in the area must meet the promotion of secondary education with a greater attention to availability of jobs.

President Chesborough expressed his gratitude for being included in the event.

“I was grateful to be invited to this important discussion…I applaud Colgate University for [organizing] the day’s discussions,” Chesborough said.

Harvey shared that overall, she was impressed by  the Upstate Institute’s event and appreciated each of the participants’ contributions.

“I thought this panel offered a unique discussion amongst two important types of leaders in our region and lives: the college president and the congressman. All four participants spoke with candor about the triumphs and difficulties of building a stronger future here in NY-22. All four gave insight into their visions for creating economic opportunity and long term ties to this area,” Harvey said.

Following the discussion, panelists and guests enjoyed a reception where they mingled in the lobby of the Colgate Inn for over an hour and a half.