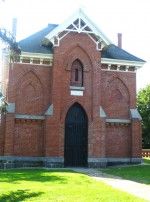 Last December, members of Delta Kappa Epsilon (DKE), which existed as an underground fraternity on the Colgate campus, accepted the Colgate administration’s amnesty program, essentially agreeing to cease and desist their activities in return for a disciplinary reprimand. Furthermore, the Maroon-News has learned that the Mu chapter of Delta Kappa Epsilon is in negotiations to sell its fraternity house to Colgate, though it is unknown whether it is also negotiating to sell the chapel located between Phi Delta Theta and DKE as well.

Vice President and Dean of the College Charlotte Johnson sent two e-mails to the Colgate community dated November 25, 2009 and December 16, 2009 regarding underground organization activity. In the former e-mail, Johnson noted the illegality of underground organization activity as outlined in the Colgate Student Handbook, noting that students in these groups are subject to punishments of suspension or expulsion. However, Johnson also wrote that such students would receive amnesty from these punishments if they reported themselves to University Discipline Officer Corey Landstrom by December 9, 2009. Exactly one week after the deadline date, Johnson wrote to the community that many students agreed to this amnesty program, and in return “accepted a disciplinary reprimand, renounced affiliation with an underground organization, and agreed to cease future activities that are in violation of Colgate’s policy on

“I don’t want to target any specific group, but we did have in mind one or two organizations that might be operating under the radar screen, and we aimed to eradicate the underground actions relevant to organizations,” Johnson said.

Johnson also emphasized the goal of the amnesty program.

“The ultimate goal of course was to dismantle any underground organizations that exist at Colgate, and the reason for that is because they present a significant risk to the health and safety of our students,” Johnson said. “We thought that the amnesty program was the best way to get students to come forward. It’s really as simple as that.”

“The goal was never to entrap students,” Associate Vice President and Dean of

While the Colgate administration was successful in its goal of dismantling underground organizations, a non-scientific Maroon-News poll conducted on its website from December 3, 2009 until January 10, 2010 indicated that many members of the Colgate community may not have been in agreement with the way the situation was handled. In response to the question, “Do you agree with how Colgate’s handling of underground organizations?”, 73 respondents replied “yes”, while 158 said “no.” 31 replied “somewhat.”

“Well, obviously, we thought about it for a long time and I’d have to say that if we had to do it all over again, we would do it the same way,” Johnson said. “I do appreciate the poll, but students and others need to appreciate that we live and breathe these things, so we have a good understanding of how to conduct our business.”

Director of Fraternity/Sorority Alumni Association Gair Meres, who also assists Greek Alumni Corporations with foundations of most Greek Houses spoke with the Maroon-News regarding negotiations between DKE and Colgate over 110 Broad Street.

“Negotiations are ongoing [between DKE and the University],” Meres said. “There is a process that needs to be followed. Corporations and organizations will need to have membership vote/approval as well as other required endorsement processes, no doubt about that. It hasn’t happened yet but should in the not-too-distant future. Each group has been in dialogue for a very long time. This process is methodical and they have to weigh lots of decisions, such as price and membership approval. This is on the same track as the other houses that were sold [to Colgate]. But I believe they are approaching a culmination of that effort shortly, and they’re closer now than ever before… All Alumni Corporation people have a general knowledge and understanding of it, and it will happen sooner rather than later.”

While Johnson did not explicitly say that negotiations were taking place, she noted that Colgate is interested in the property.

“We may indeed be purchasing that house because it’s a great piece of property,” Dean Johnson said. “We’d love to have it at some place down the road as part of Colgate’s property; it’s a prime piece of real estate. But let’s be clear that if we buy that, it would not be to bring any Greek organizations to campus.”

It is possible that if negotiations culminate with DKE selling its house to Colgate that the property would probably be used themed residential building, much like Bunche House or the Loj.

“We could also use more great houses in the Broad Street community,” Johnson said. “Every year we see an increase in demand among students who want to live on Broad Street and create their own community to create a house among a particular set of goals, and there’s a house sitting there empty, so, sure, we could use it if were able to purchase it.”

Johnson closed by answering a question as to whether plans to eradicate Greek Life are simply rumors.

“That is very true [that the rumor is erroneous],” Johnson said. “Can we please put that rumor to rest? I think we have shown our willingness over the years to support and strengthen the Greek community and keep it at Colgate.”

Johnson and Brown noted that Colgate has hired a new Assistant Dean of Campus Life, Fouad Saleet, who will be working with Greek Life as one of his responsibilities. Saleet comes to Colgate from Dartmouth, where he was the Associate Director of Coed Fraternities and Sororities Association.