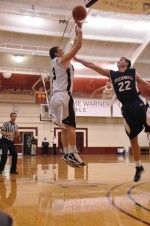 The men’s basketball team has had a bizarre year, symbolized by a foot injury to junior shooting guard Mike Venezia and some serious second half woes. Speaking of the latter, Colgate has been outscored by ten or more points in the second half three times in six Patriot League games. One of those contests occurred last Saturday, when the Raiders blew a 40-29 halftime lead en route to a 62-61 loss at home to Bucknell. Last night, however, was a different story, as sophomore Yaw Gyawu nailed a 15-foot jumper with 2.9 seconds left to lead ‘Gate to a 69-68 win over Holy Cross, exacting revenge over the team that defeated the Raiders in the Patriot League Semifinals last season. With the home split, Colgate is now in a three-way tie for sixth place at 2-4 in the Patriot League.

The Bucknell game was, in sum, a bitter disappointment. Despite 19 points from senior guard Kyle Roemer and 14 from sophomore forward Yaw Gyawu, Colgate could not hang on to a 26-13 first half lead and fell to into last place with the loss.

Colgate was trailing by one with 14 seconds left when Gyawu grabbed the rebound off a Mike Muscala missed three-pointer and drove down the court looking for a fast break bucket. However, notorious Raider killer Darryl Shazier fouled Gyawu in the back court as he tried to drive by, and Colgate was forced to inbound the ball from the sideline with 11 seconds left. What transpired next was nothing short of an unmitigated disaster. The ball was passed into first-year point guard Mitch Rolls, who then passed to Roemer on the wing. Roemer was pressured immediately and found Jonson, who also was immediately surrounded by multiple Bison. As time wound down, Jonson hoisted the ball towards the basket, but the orange sphere fell well short of its intended target.

Leading 59-53 with over five minutes remaining, Colgate gave up consecutive baskets to Shazier. Roemer responded with a bucket to give the Raiders a 61-57 lead with 4:09 left, but it would be the last points of the game for the home side. The Colgate offense became tentative and stagnant, and while its defense on the other end was solid, Bucknell big man Mike Muscala followed up a Bryan Cohen free throw with two buckets to give the Bison its first, and only lead of the game at 62-61 with 2:09 left.

The events of the second half countered strongly with the events of the first, for Colgate dominated the first 20 minutes of play with crisp passing, screening, off-ball movement, and spreading out on the floor. Meanwhile, the defense was tenacious, holding Bucknell to 37 percent shooting.

Elsewhere in the box score, sophomore center Nick Pascale had eight points en route to perhaps his best game of the year. Jonson had eight points and eight boards, and Rolls scored seven. For Bucknell, G.W. Boon led the Bison with 17, and Muscala pitched in 16.

Last night, the Raiders earned a much-needed victory over the Holy Cross Crusaders. After the heartbreaking loss to Bucknell, Colgate had fallen to last place in the Patriot League standings, and required a win at home to begin righting the ship, ending a four-game losing streak and regaining the momentum they had earlier in the month.

Early in the first half, the Raiders dug themselves into a hole. The Crusaders began by dominating every aspect of the game. They were shooting better, getting most of the rebounds and being more aggressive when going after the ball. They built an early lead and looked dominant while Colgate seemed lost in confusion. At about the halfway point of the first half, Holy Cross held a 21-10 lead and was in firm control of the contest. The Raiders, however, started playing their best, feeding off of the energy produced by the student section and scoring 21 of the last 32 points of the half to cut the Crusader lead to one at 32-31.

Colgate carried over its new-found momentum into the second half. The Raiders took a 52-41 lead after a 17-5 run capped by six points from Rolls. However, Crusaders guard Devin Brown scored 19 second-half points – 14 of which came in the last eight minutes – to help give Holy Cross a 68-67 lead with 28 seconds left, leading to the final possession. Jonson missed a three-pointer that deflected off a layer and into Gyawu’s hands. The forward then calmly drained the 15-footer to win the game. Junior guatd Smokin’ Joe Hoban stole the inbounds pass, and the fat lady sung.

Roemer and Gyawu had 18 and 17 points, respectively. Jonson had 12, and Rolls added 10 as the four accounted for 57 of the Raider points in the game.

Venezia is out of his foot cast, but a timetable for his return is uncertain.

The Raiders will now travel to Annapolis, Maryland to play Navy on Saturday at 7 p.m.