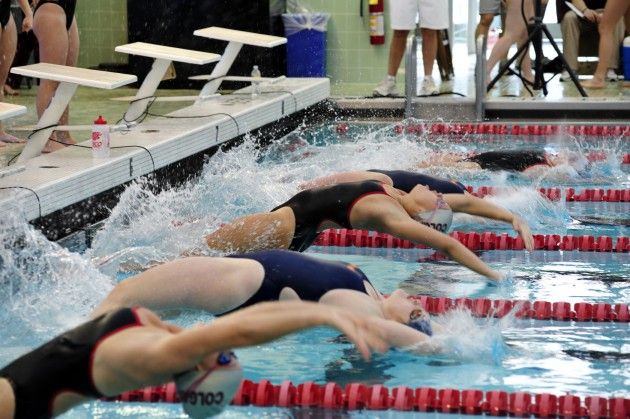 Last weekend produced mixed results for the Colgate swimming and diving team against Cornell, as the men were defeated 193-100 while the women gained a 156-144 victory. Competing at home in the Lineberry Natatorium, the men’s overall record fell to 0-6 while the women moved to 5-3.

Despite winning four events on Saturday, the Colgate men could not manage to secure a victory. In the 200-yard Butterfly, sophomore Costas Hadjipateras took first place with a time of 1:57.44. Sophomore Doug Parks earned a second place finish with a time of 2:01.24. Senior captain Robert Rutkowski took first in the 100-yard Butterfly with a time of 52.37. First-year Dan Sweeney seized Colgate’s third first place title in the 50-yard freestyle with a time of 21.61. Hadjipateras, Rutkowski and Sweeney combined with junior Tucker Gniewek to take first place in the 200-yard freestyle relay in 1:25.99. In reflecting on the team’s disappointing record, Head Coach Stephen Jungbluth was blunt but positive.

“We improve constantly, through everything we do with our training, so that we peak at our Patriot League Championship Meet,” Jungbluth said. “The boys have performed well for themselves, in spite of the record.”

The Colgate women, however, started the day off right, setting new pool records in the first two events, the 400-yard medley relay and the 400-yard individual medley. The new relay record was captured by the quartet of first-year Lia Kunnapas, senior captain Caitie Curran and juniors Erin McGraw and Caren Guyette. Sophomore Erica Derlath now holds the 400-yard individual medley record with a time of 4:27.31. Guyette finished second in the race. She and Derlath each won three events over the course of the day while Kunnapas, McGraw and Santoro each won two. In the diving pool, Colgate’s first-year Kim Pilka took first place in the women’s one meter and second place in the three meter.

The swimmers entered the day’s final race, the 200-yard freestyle relay, down seven points and in need of a first place finish, or a combined second and third place, in order to secure the win. This was the second week in a row that the final race decided that fate of the meet, but the Raiders came through under pressure. The team consisting of Santoro, Guyette senior Sarah Sciarrino and senior captain Kim Siembieda sealed the deal with a blistering time of 1:37.39, winning the event by .21 seconds. The victory marked the women’s tenth consecutive win at Lineberry Natatorium.

Both the men and women’s teams travel to Vestal, New York this Saturday to compete against Binghamton University.