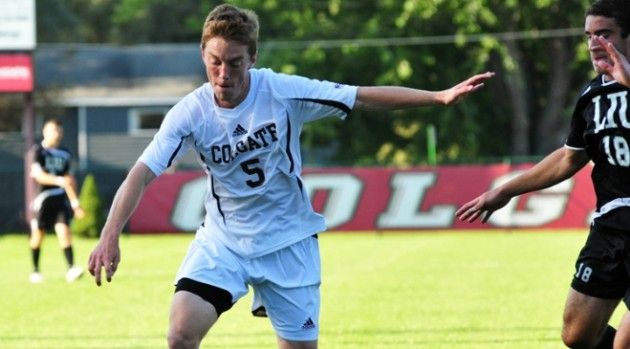 Colgate senior midfielder Chris Ross was selected today in the 4th round of the Major League Soccer SuperDraft by C.D. Chivas USA at the Pennsylvania Convention Center in Philadelphia, PA.

Taken with the 58th overall pick of the draft, Ross joins a club under the guidance of new manager and former Bayern Munich assistant, Martin Vazquez. Chivas USA is headlined on the field by US National Team players Sacha Kljestan and Jonathan Bornstein, along with MLS stalwarts like Jesse Marsch and Zach Thornton.

Ross is one of two Patriot League players taken in today’s draft, with Lehigh defender Adam Welch going to the New England Revolution one pick before Ross.

In the 2009 season, Chivas USA finished sixth in the overall MLS table with a 13-11-6 record, losing to the Los Angeles Galaxy, with whom they share a stadium, in the first round of the playoffs, 3-2 on aggregate.