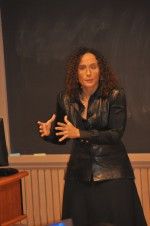 She took the stage to rapturous applause. She wore a black skirt and leather boots.

“Is this thing on?” she asked into the microphone, making sure her audience was attentive.

As she began her speech, her tone was collective and expressive, mixing in bits of colloquial language, engaging the audience with every word. She paced back and forth across the stage as if to calm her nerves and further level with her student listeners. What she had to say was of no light matter.

Professor of Africana Studies at Brown University, Dr. Tricia Rose was the keynote speaker of Colgate’s Dr. Martin Luther King, Jr. Week. She was part of a series of speakers and workshops focusing on Martin Luther King, Jr.’s legacy, the issue of race in this country and the involvement of the campus on issues of diversity.

Rose addressed an important point about the changes in racism since the Civil Rights Movement. She expressed that although racism has changed, it is only a myth that we are living in a post-racial world. With the election of Barack Obama, America may have overcome part of its long and difficult battle with racism, but we still have much ground to cover.

“If this really was a post-racial world, we wouldn’t be hailing him as the first black president. You would have to eliminate the word ‘black’ from that sentence. I mean, you can’t really say he was the first [pause] president. In the days of Martin Luther King Jr., it was easy to spot and identify someone as a racist. Racism was open and often times violent. Now, it has become a lot harder. Racism has become something more subtle. Jim Crow laws have disappeared, but the income gap and incarceration rate for African-Americans is significantly higher than their white counterparts,” Rose said.

There is also a great dilemma as to how we should address these issues. With this new form of racism, the act of speaking about racism has become taboo. Those who bring up race in conversation are accused of being racists. Rose cited this as being the central roadblock preventing the true end of racism in this country. We must first be able to create a constructive forum for discussion before any sweeping changes can be made to race relations in the modern world.

Rose ended her lecture by discussing her own area of expertise: hip-hop culture. Hip-hop was a product of the civil rights movement. It was a method of social change and a reaction to the shortcomings of the civil rights legislature of the 1970’s and 1980’s. However, as Rose explained, hip-hop has continued to change in the last thirty years. Hip-hop is now dominated by the “holy trinity,” of the gangsta-pimp-hoe and has become nothing but a method of corporate manipulation. All is not lost, however. Rose still believes that hip-hop can have a truly powerful message.

There is a great deal any student could have taken away from this lecture. It gave everyone a chance to reflect upon race in the last forty years and how things have changed. It reminded us not to look to the past to answer all of our problems. Possibly the most important message, however, was that we can change the face of racism that Rose depicted. We are the generation with the ability to take the next step in creating a racially equal world. Rose was here to remind us of that power.