The Brighter Side of Greek Life 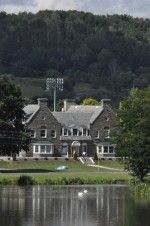 In 1978, John Landis’ Animal House painted an illustrious depiction of Greek institutions across America’s college campuses. Today, the movie is still quoted by students and can inspire laughter in almost any social circle. This widespread phenomenon has both popularized and tainted Greek institutions for years and will continue to do so for years to come. At Colgate, the image still permeates throughout the diverse student body. Falling back on these stereotypes, Colgate students often develop distaste for fraternities and sororities, believing they are bastions of exclusivity, euphoric frivolity and hazing. Members of the Greek institutions themselves, being infuriated by the judgments passed by their fellow students and friends, often respond emotionally, in retaliation to the less-than-favorable accusations pinned on their fellow brothers and sisters. These inaccurate stereotypes strike raw nerves and continue to promote tension among fellow students. Some Greek members have responded hastily and without reflection, enhancing the stereotypes of those outside the brotherhood and sisterhood circles. As a result, the campus climate survey has uncovered a significant dichotomy, consisting of displeased non-Greek students and the enthusiastic fraternity and sorority members.

Before any account of Greek life is to be given, it is important to understand the fact that, like any institution, there are those who exemplify the ideal brotherhood (or sisterhood) and others who disregard the real purposes of traditional Greek organizations. Hazing, rush selection disasters and poorly executed activities do occur, but are not an indication of inherent evils within Greek culture. Karl Marx, the father of Communism, has given an insightful analysis of self-alienating behavior, expressing how activity that is dictated by another, yet executed by the oppressed individual, causes a domestication of man, enslaving him within the confines of externalizing labor. It is not hard to imagine how the rush selection process and new member education practices may relate to this image, but it is also easy to understand how these practices can be misunderstood.

Rush allows underclassmen to examine various Greek houses, meeting members and determining whether they would be happy participating in their activities as their brothers, usually alongside their friends to accept bids together. From the other end, brothers try to select those who would be both happy among their brotherhood and would seek to promote the fraternity in a positive manner among the local and academic community. This does not involve searching for the rich, the popular or the beautiful. Rather, Greeks must choose who they can sincerely call their ‘brother’ or ‘sister.’ Consequentially, it is no surprise that rushes may try too hard to be selected or that current members may come across as arrogant, close-minded jerks. These mishaps often result unfavorably, causing rushes to feel dejected or racially-profiled. Greeks and rushes must approach this process carefully and respectfully, understanding the real purpose behind it all. It is worth noting the large diversity that currently exists among some fraternities. In my respective institution, there are brothers from Trinidad and Texas, computer science majors and history majors, heterosexual and homosexual, privileged and assisted students. Within most Greek houses, there are no sociocultural or economic barriers that rushes must penetrate to win approval. Everyone has gifts and Greeks simply try to find those which are most useful within Greek life. After all, does Colgate not similarly select the most promising students before admitting them into our wonderful academic tradition?

Greek institutions must contest rebuke in a manner that does not reveal their secret traditions. Hazing is a reality, but does not pertain to fraternities or sororities only. Sports teams, clubs and underground organizations are also suspects. New member education is not merely a conduit for dishing out, as Thomas Hedges in his “Darker Side of Greek Life” piece called it, the “S*** that we have to endure together.”

The point is to educate new fraternity and sorority members about traditions and, eventually, secrets endowed to current members, not to satisfy twisted fantasies of oppressive Greek bigots. Such evils have long been eradicated. It ensures the safe-keeping of these traditions and secrets. Furthermore, it encourages teamwork among house members, creating strong bonds and promoting immersion in activities surrounding each house. Every house has an intriguing history, consisting of founding fathers, house destruction and reconstruction and even ejection of former brothers and sisters who participated in racist acts of the recent past. These are histories of cultural rituals that emphasize equality, unity and community involvement. Sadly, actions of some fraternities and sororities did not meet these ideals, which explain the staggering amount of “de-chartered” houses on the Colgate campus.

Today, fraternities and sororities are attempting to eliminate the Animal House myht, hosting events like “Party for Pink,” “The Great Pumpkin” and many others. These are not merely attempts to make up for devious activity or apologize to Colgate and the Hamilton community. “Row for Hope” is a fantastic example. Undertaking an expedition across the Atlantic while your brothers at home collect donations adequately earns the term “exemplary philanthropic activity.” It is inappropriate to undercut the respect these actions deserve.

Philanthropy occurs through significant time and effort of Greek members. These constructive actions bring community members together, both Greek and non-Greek. Perhaps one should reflect upon the extent to which they have helped the local community before judging another’s attempts.

Greek life gives the student body an opportunity to find meaningful extracurricular activity and extend their social horizons. It allows them to bond with other students, both within and outside their graduating class. Many Greek alumni return and remain involved. Art Stenari, a veteran Phi Delt and local Hamiltonian, is one such alumnus. For many years, Mr. Stenari has contributed to our brotherhood and remains informed about our activities and annual goals. Such dedication does not occur by chance. Rather, it further indicates the bonds formed within the various brotherhoods and sisterhoods at Colgate. Without such worthwhile institutions, the unique experience our alma mater offers would be seriously lacking. While there may be darker acts of Greek men and women, these acts are not indicative of Greek establishments as a whole at Colgate. There truly is a bright and meaningful side of Greek Life that often goes overlooked.