Beating the Trend: New Beats from the MTV Woodie Awards 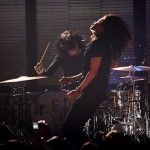 When I stood in the crowd at this year’s MTV Woodie Awards, I overheard a man next to me say to his friend: “Well, I’m listening to new music, so I’m happy.”

The main focus of the Woodie Awards was certainly placed on more indie and underground artists, artists who are just beginning to make names for themselves. The show not only handed out awards and included entertaining performances, but also exposed many of today’s most talented and unheard of artists to a new scene of college students.

Passion Pit, which is very similar to MGMT, is more upbeat and primarily uses electronics. Another worthy artist nominated is La Roux, a British synth-pop duo whose single “Quicksand” caught the attention of MTV and college students alike. The awards also acknowledged the rapper Wale and the British trio Friendly Fires, whose single “On Board” was featured in Wii Fit commercials.

Another quite interesting award presented was the “Left Field Woodie,” which honors the artists who don’t quite fit into an established genre of music, and who receive attention for their unusual antics. The winner of the award was Tech N9Ne, a rapper who has been in the industry for over twenty years. His latest album K.O.D. was the number one indie album on the billboard charts in its first week of release.  Another noteworthy nominee is Janelle Monae, a futuristic Afro-funk singer who was recently nominated for a Grammy Award for her single “Many Moons.”

Another female nominee is Amanda Blank, who uses rap, electronic and pop influences in her multidimensional music. Major Lazer, the fourth nominee for the award, incorporates reggae style with dancehall beats, which is sure to pump up any college dorm room.  The last nomination went to garage punk enthusiast Jay Reatard, whose shows are renowned for their high energy and clear outrageousness.

These are only a few of the artists acknowledged at the MTVu Woodie Awards, and are only a few of many artists I had the privilege to listen to at the event. The full list of the winners and nominees is available online at www.mtv.com/ontv/woodieawards/2009. I encourage all readers to check these artists out, and to potentially add a few to your iTunes Library.