Back to Basics: Sapperstein Teaches Shabbat 101 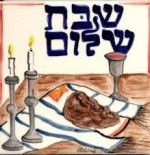 There’s an alternate to your normal Friday night dinner plans at Frank – one that provides you with not only nutritional nourishment, but some spiritual nourishment as well. This alternate option is the weekly Shabbat services and dinner held at the Sapperstein Jewish Center, which the Colgate Jewish Union opened to the public last Friday November 6, with their “Shabbat 101” event. In place of the regularly held Shabbat services, the service was converted into a learning experience. This “Shabbat 101” welcomed anyone from any religious background to come and learn about what the Shabbat service is really about. Led by Rabbi David Levy, Colgate’s University Chaplain and Director of Jewish Life, the educating service drew a diverse crowd. Rabbi Dave broke down the service part by part, explaining the meaning, origin and significance of the various prayers and rituals that are performed every week. This was followed by a delicious dinner made by members of the CJU.

The Shabbat service opens with the lighting of the Shabbat candles, two of them, which Rabbi Dave explained could be due to the fact that very conservative Jews are unable to use any electricity on Shabbat night, so two candles is simply practical – more candles, more light. The first part of the service is called Kabbalat Shabbat, and roughly translates to “Welcoming the Shabbat Bride.” During this part, Hebrew prayers are sung and the congregation rises and turns towards the doors in order to literally “welcome the bride” – or any other poor soul unfortunate enough to walk in at that moment, as Rabbi Dave joked.

In the second part of the service, Rabbi Dave gave the D’Var Torah (“a word about the Torah”), where the rabbi discusses the weekly portion of the Torah. During “Shabbat 101,” the portion of the Torah came from Genesis, during the story of Abraham. The D’Var Torah can focus on anything from the passage, but hopes to give a bigger message through the word of the Torah. Rabbi Dave focused on Abraham welcoming his visitors, and urged the congregation to adapt a similar welcoming demeanor. The service ended with saying the traditional prayers over the wine and bread to begin the Sabbath meal, the Shabbat dinner.

The Shabbat dinner, which the CJU spends the hours before the service cooking in preparation for the dinner later that night, was a quickly consumed feast of  holla, matzah soup, chicken, kugel, vegetables and for desert, brownies and marble cake. It was almost comical to see the population inside the Sapperstein Center double come dinnertime. Is that a testament to the cooking skills of the CJU, or an interesting insight into Colgate students’ religious priorities? We may never know, but either way, it was clear that “Shabbat 101” was quite a success.