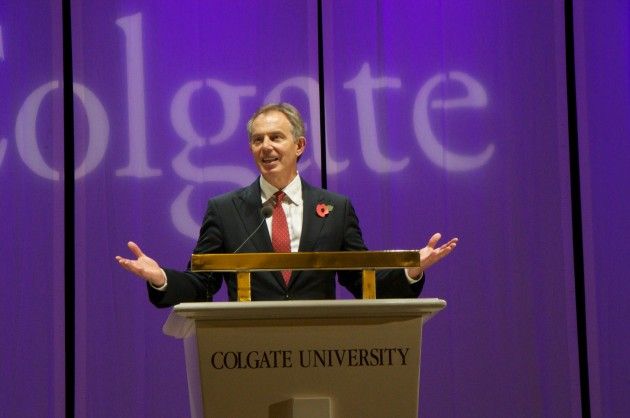 On Saturday, October 31, world leader and former British Prime Minister Tony Blair addressed the Colgate community as a part of the Global Leaders Lecture Series. Prior to his speech in the Sanford Field House, Blair took questions at Watson House on a range of subjects. His small audience included students of the political science course “Liberal Democracy and Its Limits,” the Benton scholars and a handful of Colgate professors.

The event formally began with a brief welcome from Dr. Daniel Adler, Co-Chair of the Parents’ and Grandparents’ Fund, who welcomed the audience of over 4,500 and introduced The Resolutions. In an impressive and spirited performance, the campus a capella group, welcomed Blair to Colgate with three songs: Queen’s “Somebody to Love,” the Beatles’ “There Are Places I Remember” and U2’s “Where the Streets Have No Name.”

Senior Adam Weisbarth, a member of the Resolutions, described the excitement of performing for such a large and distinguished crowd.

“The adrenaline from the crowd was really a boost for everyone, and it was a great show for us. I know this was the most fun I’ve ever had on stage,” Weisbarth said.

Following the musical tribute, Co-Chair of the Parents’ and Grandparents’ Fund Alice Mintzer Adler spoke briefly on the Global Leaders Lecture Series before handing the podium over to Interim President Lyle Roelofs. Roelofs provided the audience with a short introduction and then welcomed Blair to the podium.

Blair immediately established a friendly rapport with the audience, thanking the Resolutions for their performance, promising them a signed copy of “Where the Streets Have No Name” by his “dear friend Bono.” Afterwards, the former Prime Minister jumped into the substance of his lecture, as he told the audience, “I think it is a very tough time to be a leader,” before outlining three major challenges he feels the world is currently facing: the economic crisis, the challenge of security and the reform of global climate change policy.

Within these three subject areas, Blair touched briefly upon how the global community has become increasingly interdependent. In his discussion on security, he spoke about Iran, advocating a policy that includes discourse and diplomacy while also making it clear the unacceptability of Iran becoming nuclear. On the same issue, he discussed the need for an unconventional approach to challenges that includes “a combination of hard and soft power,” which fit into his idea that “politics is…in part about ideology…but also about an attitude.”

In choosing to cover such broad topics in such a short period of time, some felt Blair limited himself from going into depth on each of the issues. As a result, they argued that he was unable to provide many specifics supporting his arguments; he emphasized his belief that democracy is rootedin universal human values, but glossed over the failures of democracies by omitting any acknowledgement of what Fareed Zakaria termed as “illiberal democracies,” countries with democratic processes that disregard the principles of liberalism to the detriment of their citizens.

Despite this alleged omission, Blair spoke passionately about his beliefs on democracy, and provided the audience with insight into his worldview.

“Democracy is the best system of government [because it] stands for an idea of justice,” Blair said.

He also expounded upon the idea that democracy and justice speak to the human spirit. In regards to each of the challenges he articulated, Blair promoted the idea that a “changing world means changing our ideas.”

Additionally, he provided his audience with a message and directive as he emphasized the importance of demonstrating to “the world that our sense of compassion does not stop at our own frontiers.”

The audience seemed to warm to Blair, as students and faculty praised Blair’s personable demeanor and inspiring message. Senior Catherine Leibowitz, a student of “Liberal Democracy and Its Limits,” described her appreciation of Blair’s mode of speaking.

“I really appreciated how conversational and honest he was; it was an event I’ll never forget,” Leibowitz said.

For many students, Blair’s speech was complimentary. Senior Kelly Murphy expressed her appreciation over being able to hear Blair’s viewpoint.

“As an International Relations major, it was inspiring to hear about the issues we discuss in class from his perspective as a global leader,” Murphy said.

Besides admiring Blair’s style, Leibowitz also expressed how the substance of Blair’s speech left an impression on her.

“The main message I left with was that democracy is unquestionably the best form of government. No one would choose not to have freedom and justice,” Leibowitz said.

“I love how positive Mr. Blair is about the potential for democracy and freedom to be spread throughout the world,” Weisbarth said.

Professor of Political Science Stanley Brubaker, who currently is teaching the course “Liberal Democracy and Its Limits” also commented on Blair’s message regarding democracy.

“The paramount global issue of today is not ‘a clash between civilizations,’ but ‘a clash about civilization.’ We must thus be wary of the all too common claptrap championing of multi-culturalism, recognize that a way of life that provides freedom, protects property right and follows the rule of law, formed in a democratic process, is a way of life most consonant with the human spirit, and that this way of life must be nurtured and defended,” Brubaker said.

“His remarks reflected a level of pragmatism and intellect that we see in so many of our students here at Colgate. Mr. Blair articulated a formula for 21st century leadership that I hope all in the room took to heart,” Roelofs said.

“The main message I got from Blair’s speech was the urgency of collective action. I think he was prodding us to overcome what many see as Americans’ traditional impulses to either go it alone in the world (unilateralism) or avoid foreign entanglements (isolationism), neither of which he sees as viable in the face of economic instability, terrorism and climate change,” Fogarty said.

Fogarty also felt that Blair expressed the importance of harnessing one’s passion to affect change in the world.

“For Colgate students, I think his message was pretty standard – try to transform the world. Blair is a conviction politician:  he wants others to embrace the issues with the same zeal that he does, because zeal can overcome inertia and political obstacles,” Fogarty said.

Overall, the speech contained a positive message, as Blair’s words to the audience and his actions in the past truly show that a person can translate their convictions into actions that help shape the world.