Men’s Basketball Loses to No. 12 UConn and Yale 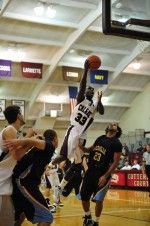 Two of Colgate’s finest sports moments occurred on two separate days in early March 2008. The men’s basketball team, a third seed in the Patriot League Tournament, hosted the quarterfinal and semifinal rounds against Lafayette and Bucknell respectively. Colgate won both of both those contests in many thanks to a 6’3″ shooting guard with a shaved head that sported the number 13, Kyle Roemer. The Raiders’ superstar netted 32 points in a 76-74 win in the first round before putting the team on his back with a 25-point effort against a scrappy Bucknell squad, buoying Colgate to a 54-40 victory. The Raiders fell short to American University in the finals, but not before Roemer scored 16 more and fell just two short of the tournament record. Expectations remained high for the team heading into 2008-09, but disaster struck in September, when Roemer tore his ACL in a preseason pick-up game that ended his season. That day, the Raiders lost much more than the man who averaged 16.2 points per game; they lost their on and off-the-court leader, who guided the Raiders through tough stretches and showed the team how to win through sheer willpower. Without their leader, the now youthful Raiders struggled to a disappointing 10-20 overall record (5-9 in the Patriot League), last season starting three first-years along the way. Colgate did upset Navy in the Patriot League quarterfinals, but got smashed by Holy Cross in the semifinal round.

“Kyle Roemer is a incredible leader first and foremost,” Head Coach Emmett Davis said. “He leads by example and he’s a great worker…in the game against UConn there was a scramble situation, and he’s diving across the floor to get a loose ball. He is always playing his hardest, and that’s infectious. 16 points a game as a junior is huge, but his leadership and ability to get others to follow is him even of more value.”

This season, Roemer, now with a long and flowing lion’s mane resting on his head, returns to the mix as a sixth-year senior, and he brings with him a deft shooting touch and an level of experience and leadership no one in the Patriot League can match. Five starters from last year’s teams — sophomore point guard Anthony Hill, junior shooting guard Mike Venezia, sophomore small forward Yaw Gyawu, power forward Ben Jonson and sophomore center Nick Pascale. Venezia, Gyawu and Jonson each averaged between 10-11 points per game last season to lead the Raiders in scoring. Colgate loses its top rebounder and shot blocker in senior Alex Woodhouse, who graduated last summer.

Woodhouse was a huge defensive presence in the paint, and it will be up to Pascale and number of others to fill his role. Colgate also loses key bench players Tre Vinson and Willie Morse.

The Raiders are now playing with a starting lineup of Hill, Venezia, Roemer, Gyawu and Jonson. Hill is a steady point guard that will drill an open three-pointer. Venezia is an excellent catch-and-shoot type shooter, and with Roemer on the floor, he should excel in getting more open looks. Gyawu is a 6’4″ man-child. He can back up his man into the key and score, or he can spot up from 15-18 feet and then take his man off the dribble before going for a layup or dunk. He is a bit undersized for his position, however. Jonson is the most improved of the bunch, and has surprising range and rebounding ability for a guy his size (6’6″ power forward being asked to play center.). First-year point guard Mitch Rolls and Pascale see most of the playing time off the bench. Rolls is a quick combo guard that is being asked to play the point. He can shoot the three and find the open man, but he needs to work on his turnover rate, which has been high in the first two games of the season. Pascale, a 6’10”, 250 pound big man, needs to stay out of foul trouble to see the floor more, but he is certainly a space eater when he is there. The lanky Central New York center can block shots, rebound and he is pretty athletic for a guy his size.

As for as Colgate’s conference opponents are concerned, the Patriot League, as Head Coach Emmett Davis has said publicly, is a wide-open race, but Holy Cross was almost unanimously selected to win the League in the preseason poll. Though the Crusaders return many of their top players from last season, the conference’s winner is not set in stone. Lehigh returns Zahir Carrington and Marquis Hall, two of the League’s top scorers from last season. Bucknell returns almost everyone from last season, and like Colgate gets one of their best players back from injury in Stephen Tyree, the League’s Defensive Player of the Year in 2008. Navy returns big man Mark Veazey and second-team all league guard Chris Harris, who can play the point or shooting guard with ease. Army returns a bevy of players, namely guards Cleveland Richard, Josh Miller and Julian Simmons. The Black Knights were the Cinderella Story from last season, as they lost 61-60 to American in the Patriot League semifinals. American loses its entire starting lineup, and Lafayette does not have the pieces to make a run. In essence, the league is truly wide-open, and as many as six teams realistically have a shot at winning the conference.

As of now, Colgate is 0-2, having lost two games in the Preseason National Invitational Tournament. The Raiders dropped a 77-63 contest to No. 12 UConn before losing 65-55 to Yale the following afternoon in a consolation round game. In the UConn game, Venezia pitched in 17 points, while Roemer and Gyawu each had 12. For UConn, forward Stanley Robinson scored 18, and Kemba Walker pitched in 16. Colgate played well in the first half of the UConn game, even leading 32-28 with just over a minute left before intermission. But the Huskies were too tall, strong and athletic, and opened up the second half with a

“They really came at us in the beginning with pressure and they got off to an 8-2 lead at the start… but we [had some great plays] and I thought we took the crowd out of it and we played really well… then in the start of 2nd half I thought we battled, but their athleticism just took over. They probably have three NBA players for sure with Walker, Robinson and Dyson,” head Coach Davis said.

The 65-55 loss to Yale was a disappointing one, as Yale out-rebounded Colgate 38-27 and won the turnover battle 11-19. 18 of the Bulldogs’ 38 boards were on the offensive glass. Due to those two statistics Yale had 35 total points off second chances and turnovers.

“You don’t want to make excuses, but we had a difficult situation because we didn’t get back until 12:30 [after the UConn game], and then we had to turn around and play against solid Yale team the next day,” Coach Davis said. “I think they had slight advantage but the reality is in the first half we played pretty well, but in the second half, whether it was fatigue or lack of execution, we didn’t score for seven minutes and we had 5 turnovers in that stretch.”

As for any general comments about the two games as a whole, Davis had this to say.

“We showed ourselves that we can play against best teams in the country; a team that was in the Final Four last year,” Davis said. “Our transition defense was good; we have up no easy transition buckets. We were very good rebounding with UConn, but we got outrebounded against Yale…we need to continue to work on other aspects of our game. Rebounding needs to get better and be a team thing. Everyone needs to do it, and we’ve got to take care off ball and execute the half court game. If we take care of execution, turnovers and rebounding we’ll be fine.”

While Colgate has suffered two losses, this team has a lot of time to gel in order to return to its end of season 2007-08 form. The Raiders will now play TCU on Monday night and Wisconsin-Milwaukee on Tuesday to finish the Consolation NIT round.