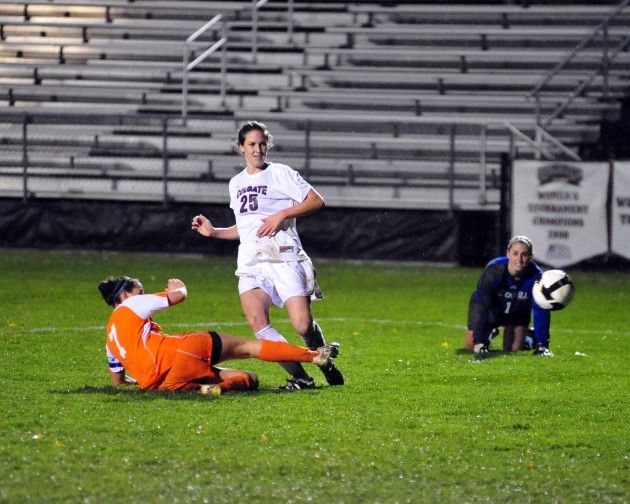 Stepping out onto the field for, undoubtedly, their biggest match of the season, the Colgate women’s soccer team knew exactly what was at stake. Win, and the Patriot League tournament gets played in Hamilton, where the Raiders have just one loss since early September. Lose or draw, and travel to Lewisburg, PA, where Bucknell was undefeated in conference play. The magnitude of the game gave the Raiders some extra motivation; they walked away with a 2-1 victory, and the Patriot League regular season title in tow.

“Everyone was really excited to play,” senior Liz Polido said. “There was a great vibe before the game and in all the practices leading up to it.

“The possibility of finishing in first place after regular season play was definitely a motivating factor,” junior defender Calista Victor added. “We all knew that if we could come away with a win we would host the tournament and we wanted that so badly.”

The day was not all glory for Colgate, however, as soon after kickoff, it looked as though it could be a miserable game. Just two minutes into the match, a cross from Bucknell’s Brooke Stokes met the foot of Kelliann Doherty, who capitalized on her opportunity, putting the ball past Colgate’s first-year goalkeeper Ashley Walsh to the far post, making it 1-0 in favor of the Bison, and putting Colgate in an all-too-familiar position, down an early goal.

“I think we had a bit of a breakdown during that goal,” Polido said. “We left players unmarked and our communication was off.”

Continuing a very familiar script, however, the Raiders came back to tie up the game. In the 28th minute, Bucknell made the horrible mistake of leaving Colgate’s senior captain Jillian Arnault alone in the penalty area. Arnault cut it close with her shot, but because of a Zidane-like bounce off the crossbar that allowed the ball to just pass the goal line, Colgate leveled the game at 1-1, which remained the score through halftime.

“It was great to get that goal,” Arnault said. “It brought everyone’s spirits up and we were all pretty confident we could end up winning the game.”

The second half was an even affair, with Bucknell more than content to play for the draw, as one point would still clinch them the regular season title. Still, the Bison called Walsh into action three times, and she was equal to the task on all three occasions. Colgate mustered two shots on Bucknell’s Kathryn Sutton, but she, like her counterpart, was not to be beaten in the second 45. With about five minutes remaining, however, Colgate had a golden chance to win the match. Colgate’s junior forward Anna Baldwin was alone with Sutton on a tight angle, from about 10 yards out. Baldwin attempted to curl the ball in on goal, but missed by inches, to the dejection of both the team and the Colgate faithful. With the score still level at 1-1, the match headed to overtime.

Overtime started out as an all-Colgate affair, as the Raiders kept Bucknell from maintaining any worthwhile possession, as their possession would almost certainly lead to the time-wasting all soccer fans around the world hate to see. Colgate’s non-stop possession paid off quickly. In the 6th minute of overtime, first-year Jillian Kinter lofted a long ball over the Bucknell midfield to a waiting Baldwin. She blazed past the lone defender, leaving just Sutton between Baldwin and the league title. Baldwin reached into her bag of tricks and bamboozled the keeper, leaving a gaping goal in front of her, and this time, Baldwin would not be denied. As the ball bounded into the back of the net, the Colgate players erupted in celebration, as Bucknell dropped to the ground with expressions of disbelief and agony.

“It’s an unbelievable feeling and I’m so happy I could contribute to the team’s success,” Baldwin said.

With the win, Colgate clinched the Patriot League regular season title and will host the conference tournament this weekend, with semifinal matches on Friday, November 6, and the final on Sunday, November 8 at Van Doren Field. Colgate will open up against fourth-seeded Navy at 5 p.m., while the second-seed American will take on third-seeded Bucknell in the other semifinal at 7:30 p.m.

“It’s very comforting to know that such accomplishments do not go unnoticed by any,” Baldwin said. “I have been congratulated by everyone on campus, from the Deans to the students. I only hope we can continue our winning streak throughout the [Patriot League] tournament and beyond.